Arrays and Array Algorithms in Java

Following the design convention of not using the 0 month and 0 days, we end up with a 10×13×32 array. Note the use of final variables to represent the size of each dimension of the array. This helps to make the program more readable.

From previous chapter, the rainfall example for each year of the rainfall data is represented as a separate page in the figure below. On each page, there is a two-dimensional table that consists of 12 rows (1 per month) and 31 columns (1 per day). 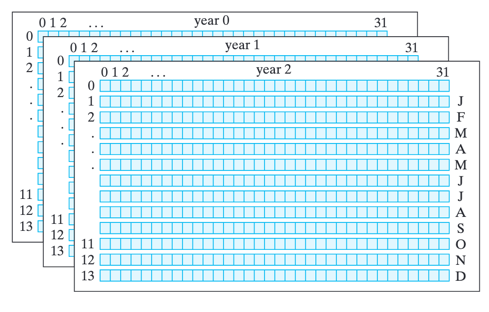 You might imagine that our study could be extended to cover rainfall data from a number of different cities. That would result in a four-dimensional array, with the first dimension now being the city. Of course, for this to work, cities would have to be represented by integers, because array subscripts must be integers.

As you might expect, algorithms for processing each element in a three-dimensional table would require a three-level nested loop. For example, the following algorithm would be used to initialize all elements of our three-dimensional rainfall array:

If we added a fourth dimension to our array and wanted to extend this algorithm to initialize it, we would simply embed the three-level loop within another for loop that would iterate over each city.

It is possible to use an initializer with a multidimensional array. For instance, the following examples create several small arrays and initialize their elements:

he first of these declarations creates a 2×3 array of integers. The second example creates a 2×2 array of characters, and the third example creates an array of double consisting of three rows, each of which has a different number of elements. The first row contains three elements, the second contains two elements, and the last row contains four elements. As this last example shows, the rows in a multidimensional array don’t all have to have the same length.

Using initializers, as in these examples, is feasible only for relatively small arrays. To see why, just imagine what the initializer expression would be for our three-dimensional rainfall array. It would require 4,160=10×13×32 zeroes, separated by commas!