Automation helps us speed those manual boring tasks. The ability to automate means you can spend time working on other more thought-intensive projects.

Whenever you consider automating a task ask the following questions:

If your project is too large or loosely defined, try breaking it up into smaller tasks and automate a few of those tasks. Perhaps your task involves a report which downloads two datasets, runs cleanup and analysis, and then sends the results to different groups depending on the outcome. You can break this task into subtasks, automating each step. If any of these subtasks fail, stop the chain and alert the whoever is responsible for maintaining the script so it can be investigated further.

What is a data pipeline? they consist mainly of three distinct parts: data engineering processes, data preparation, and analytics. The upstream steps and quality of data determine in great measure the performance and quality of the subsequent steps.

Why do pipelines matter?

This makes data engineering one of the most critical foundations of the whole analytics cycle.

When working with data pipelines always remember these two statements:

Your Data is Dirty. Unless Proven Otherwise.

All Your Data is Important. Unless Proven Otherwise.

As your data engineering and data quality demands increase so does the complexity of the processes. So more often than not you will eventually need a workflow manager to help you with the orchestration of such processes.

Think of a workflow manager as:

you should see the following message as well as a change in your prompt:

To see the existing databases you can use the following command:

as well as creating a corresponding user:

Now we need to make sure that the airflow user has access to the databases:

If you want to restrict the access of this user to the airflowdb database, for example, you can do it via:

so now the output of ` SELECT user, host FROM mysql.user;` should look like this:

if you need to remove a user you can use the following command:

🚦Checking connection to the database from Python

The following snippet will allow you to connect to the created database from Python:

Note that you need the database name, password, and user for this.

dbconnect is a connection object which can be used to execute queries, commit transactions and rollback transactions before closing the connection. We will use it later.

The dbconnect.close() method is used to close the connection to database. To perform further transactions, we need to create a new connection.

We are going to create a Python script that helps us to achieve the following:

We will be using the Tweepy library for this (docs here https://tweepy.readthedocs.io/en/latest/) .

🚦 The first step will be to create a config file (config.cfg) with your Twitter API tokens.

Now to the coding bits:

Let us create a folder called etl-basic and a stream_twitter.py script in it.

We are going to create a SQL table to save the tweets to. This table will contain the following:

This corresponds to 5 columns and the primary key.

We already know how to connect to a database:

Now we need to write a function to create the table

The Twitter Streaming API has rate limits and prohibits too many connection attempts happening too quickly. It also prevents too many connections being made to it using the same authorization keys. Thankfully, tweepy takes care of these details for us, and we can focus on our program.

The main thing that we have to be aware of is the queue of tweets that we’re processing. If we take too long to process tweets, they will start to get queued, and Twitter may disconnect us. This means that processing each tweet needs to be extremely fast.

Let’s us transform the connection script we created before:

The next step is to create a stream listener.

The StreamListener class has a method called on_data. This method will automatically figure out what kind of data Twitter sent, and call an appropriate method to deal with the specific data type. It’s possible to deal with events like users sending direct messages, tweets being deleted, and more.

🚦 In pairs discuss how you would create the populate_table function

🚦 For this to be called we need to wrap around a main function:

🚀 So far we have collected some data through streaming (enough to collect some data). And created a database where this data is going to be deposited into.

The next step is to transform the data and prepare it for more downstream processes.

There are different mechanisms to share data between pipeline steps:

In each case, we need a way to get data from the current step to the next step.

🚦 The next step would be to add some ‘transformation’ steps to the data set.

Modify your stream_twitter.py so that the table contains also: language, follower count and country.

This script will do the following:

Airflow is a Workflow engine which means:

It is highly versatile and can be used across many many domains: 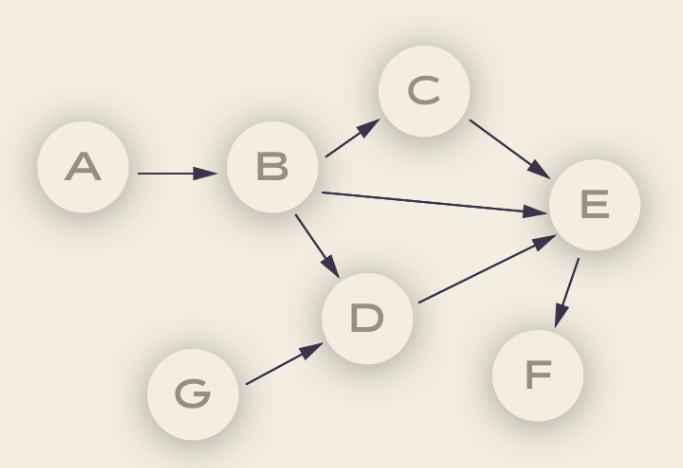 each node in a DAG corresponds to a task, which in turn represents some sort of data processing. For example:

These ‘pipelines’ are acyclic since they need a point of completion.

Each of the vertices has a particular direction that shows the relationship between certain nodes. For example, we can only anonymize data once this has been pulled out from the API.

This is one of the most important characteristics of good ETL architectures.

When we say that something is idempotent it means it will produce the same result regardless of how many times this is run (i.e. the results are reproducible).

Reproducibility is particularly important in data-intensive environments as this ensures that the same inputs will always return the same outputs. 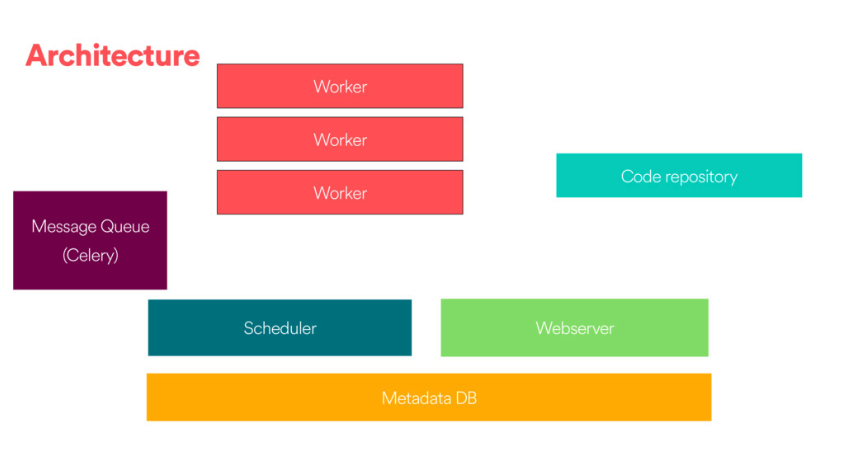 There are 4 main components to Apache Airflow:

The GUI. This is under the hood a Flask app where you can track the status of your jobs and read logs from a remote file store (e.g. Azure Blobstorage).

This component is responsible for scheduling jobs. This is a multithreaded Python process that uses the DAGb object to decide what tasks need to be run, when and where.

The task state is retrieved and updated from the database accordingly. The web server then uses these saved states to display job information.

The mechanism that gets the tasks done.

Workflow as a code

One of the main advantages of using a workflow system like Airflow is that all is code, which makes your workflows maintainable, versionable, testable, and collaborative.

Not only your code is dynamic but also is your infrastructure.

Tasks are defined based on the abstraction of Operators (see Airflow docs here) which represent a single idempotent task.

The best practice is to have atomic operators (i.e. can stand on their own and do not need to share resources among them).

You can choose among; 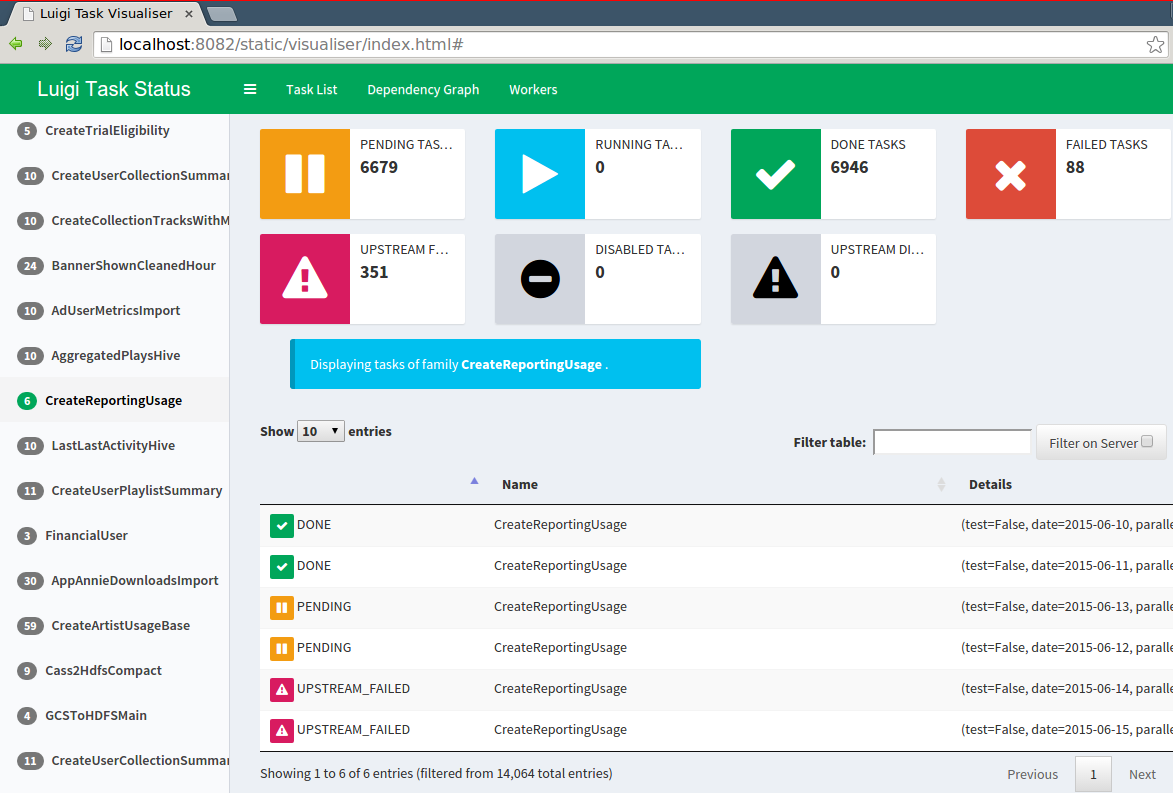 Airflow 101: working locally and familiarise with the tool

The following prerequisites are needed:

Getting your environment up and running

If you followed the instructions you should have Airflow installed as well as the rest of the packages we will be using.

So let’s get our environment up and running:

If you are using conda start your environment via:

If using pipenv then:

Airflow home lives in ~/airflow by default, but you can change the location before installing airflow. You first need to set the AIRFLOW_HOME environment variable and then install airflow. For example, using pip:

We need to create a local dag folder:

As your project evolves, your directory will look something like this:

As we mentioned before Airflow uses a database to keep track of the tasks and their statuses. So it is critical to have one set up.

To start the default database we can run ` airflow initdb`. This will initialize your database via alembic so that it matches the latest Airflow release.

The default database used is sqlite which means you cannot parallelize tasks using this database. Since we have MySQL and MySQL client installed we will set them up so that we can use them with airflow.

From the command line:

and initialize the database:

Notice that this will fail with the default airflow.cfg

Here we are replacing the default executor (SequentialExecutor) with the CeleryExecutor so that we can run multiple DAGs in parallel. We also replace the default sqlite database with our newly created airflow database.

Now we can initialize the database:

we can head over to http://localhost:8080 now and you will see that there are a number of examples DAGS already there.

Let us go over some of the commands. Back on your command line:

we can list the DAG tasks in a tree view

we can tests the dags too, but we will need to set a date parameter so that this executes:

By using the test commands these are not saved in the database.

Behind the scenes, it monitors and stays in sync with a folder for all DAG objects it contains. The Airflow scheduler is designed to run as a service in an Airflow production environment.

Now with the schedule up and running we can trigger an instance:

This will be stored in the database and you can see the change of the status change straight away.

What would happen for example if we wanted to run or trigger the tutorial task? 🤔

Let’s try from the CLI and see what happens.

If it is properly setup you should be able to see this straight away on your instance.