In this chapter we will build a racing game together, step by step. The Python we will use is: conditionals, loops, lists, functions and tuples. We will show use of velocity, high score and a title screen.

Similar to the shooter game, we will begin with a complete program listing but with empty bodies for some of the functions that we will fill in later. (Python will not run a program with completely empty functions, so they just contain pass to indicate to Python they do nothing.) 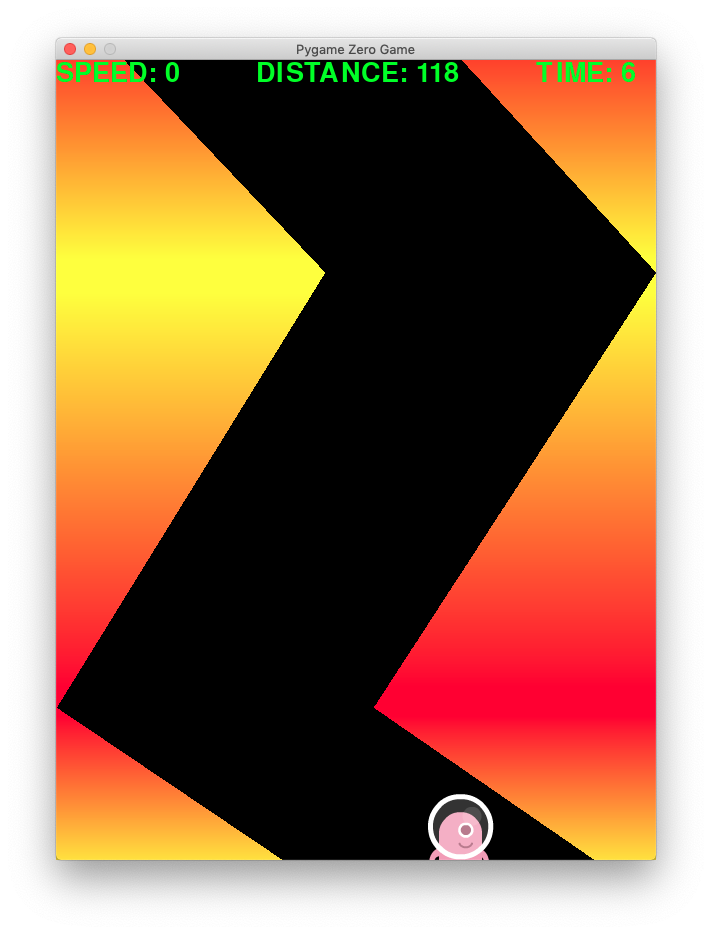 Like the shooter program, we begin we three things:

These functions now check a boolean variable playing. If False then instead of drawing/updating the game we show the title screen.

The only really complicated part of this program is how we store the shape of the tunnel the player is racing down. lines is a list of tuples. A tuple is like a list but cannot be modified and can be unpacked into separate variables. Each tuple will represent one horizontal line of the screen. It will have three values, x, x2 and color, representing the position of the left wall, the gap between the left wall and the right wall and the colour of the wall.

Run the program. Verify it has a title screen and you can start the game and see the player. (That is all it will do until we fill in the remaining functions.)

Replace the definition of player_input() with this:

Run the program. Verify the player can move left and right and has momentum. Try adjusting the speed or making a limit so you can't go too fast.

We already have code to draw the walls, but currently lines is empty so nothing gets drawn. Replace the function generate_lines() with this. Note that we immediately call generate_lines() after defining it to generate the walls for the start of the game.

Run the program. Change the colour of the walls from red to green.

Modify the line that sets the colour of the generated line to this:

Modify the scroll_walls() function so it removes lines from the bottom of the screen according to the player’s vertical velocity.

Change the amount of the forward acceleration to make the game faster or slower.

Currently the player can move through the walls - we don’t want to allow this. Also we want the player to lose all their velocity each time they collide as a penalty.

Make the collision more bouncy, i.e. the player bounces further when he hits the wall.

Currently the player has infinite time. We want decrease the time variable by how much time has passed and end the game when time runs out.

Make the game last for 30 seconds.

The game is easier but perhaps more fun if you can play it with mouse. Pygame will call this function for us automatically.

List of changes: Added a brief overview of Python in Chapter 1; Removed some exercises from a few chapters; Changed some titles