What Are Code Reviews and How to Do Them Effectively

What is Code Review?

Code review is the process or rather an activity in which code written by a developer is inspected by other developers to look for defects and improvements. In other words, developers work on their code and ask for one of their peers to review their changes before they are merged into the main codebase.

In the last few years, code reviews have become part of normal workflow for large and small teams, ensuring that every change gets looked by at by least one other person. They are an integral part of almost every large company like Microsoft, Google, and Amazon to name a few, where every line of code is reviewed and approved by developers before it is merged into the main codebase.

What To Look For in Code Reviews

It varies from team to team, but generally, a code reviewer should consider the following:

Why do Code Reviews?

Code reviews take time: the change is held up until it is reviewed by usually 2 people. So why do it?

When done correctly, code review is a proven technique that helps improve code quality and spread core knowledge across the team. It forces developers to hold themselves to a higher standard because they know that their code will be reviewed by their peers. It’s also a great tool for mentoring new team members on nuances of the code base. Or as Martin Fowler puts it:

Code reviews help spread knowledge through a development team. Reviews help more experienced developers pass knowledge to less experienced people. They help more people understand more aspects of a large software system. They are also very important in writing clear code. My code may look clear to me, but not to my team. That’s inevitable–it’s very hard for people to put themselves in the shoes of someone unfamiliar with the things they are working on.

So even though code reviews introduce extra time, it’s an excellent trade-off considering all the benefits that we get out of them. (You could even argue that they save time that’d be spent in future on bug fixes, direct knowledge sharing or paying technical debt as a result of unmaintainable code.) According to Code Complete 2, code reviews are very effective at detecting bugs and cites several case studies:

However, many teams struggle with effective code reviews. In fact, when done incorrectly, code reviews can be quite painful. In dysfunctional teams and organizations, it can quickly turn into a rather nasty experience for everyone involved:

How to do Code Reviews

Let’s look at some techniques that the authors of the pull request, reviewers and company management can use to do code reviews effectively.

Managers should make sure that everyone understands the goals and importance of code reviews. Unless code reviews are part of your culture, developers are not going to ask their peers to review their code. Make sure developers get enough time in their Sprints for code reviews.

Managers can also help by setting up the right tools and adapting the release workflow to make code reviews a mandatory activity. Source control management systems like GitHub and Gitlab have built-in support for code reviewers that allows comments on specific lines of code, blocking merge until required number of approvals have been granted, etc. You can also use 3rd party tools like Crucible from Atlassian.

Make sure developers have enough bandwidth in their Sprints to review code. Otherwise, code reviews can end up taking a long time to complete.

Everyone: Remember the Human

In his book, Peer Reviews in Software: A Practical Guide, Wiegers writes:

The dynamics between the work product’s author and its reviewers are critical. The author must trust and respect the reviewers enough to be receptive to their comments. Similarly, the reviewers must show respect for the author’s talent and hard work. Reviewers should thoughtfully select the words they use to raise an issue, focusing on what they observed about the product. Saying, “I didn’t see where these variables were initialized” is likely to elicit a constructive response, whereas “You didn’t initialize these variables” might get the author’s hackles up.

It is easy to become fixated on the code, but remember, there’s a human at the other end of the table (or computer). A human who has opinions. A human who is entitled to have an ego. Remember that there are many ways to solve a problem.

Some of these things won’t work if they come off as rehearsed or said in a sarcastic tone. Treat the code review as you would a normal conversation. You are listening to another person and should genuinely seek to understand their perspective. Offer suggestions and tips when they are necessary. If the code is great, don’t be compelled to find something negative to say about it.

Modern tools like GitHub, GitLab, Crucible and others have made the code review process easier than ever. Let’s look at a good code review example I found on GitHub. The developer made some changes and opened a pull request (PR). The first thing to notice is the detailed and to the point commit message by the author describing the change: 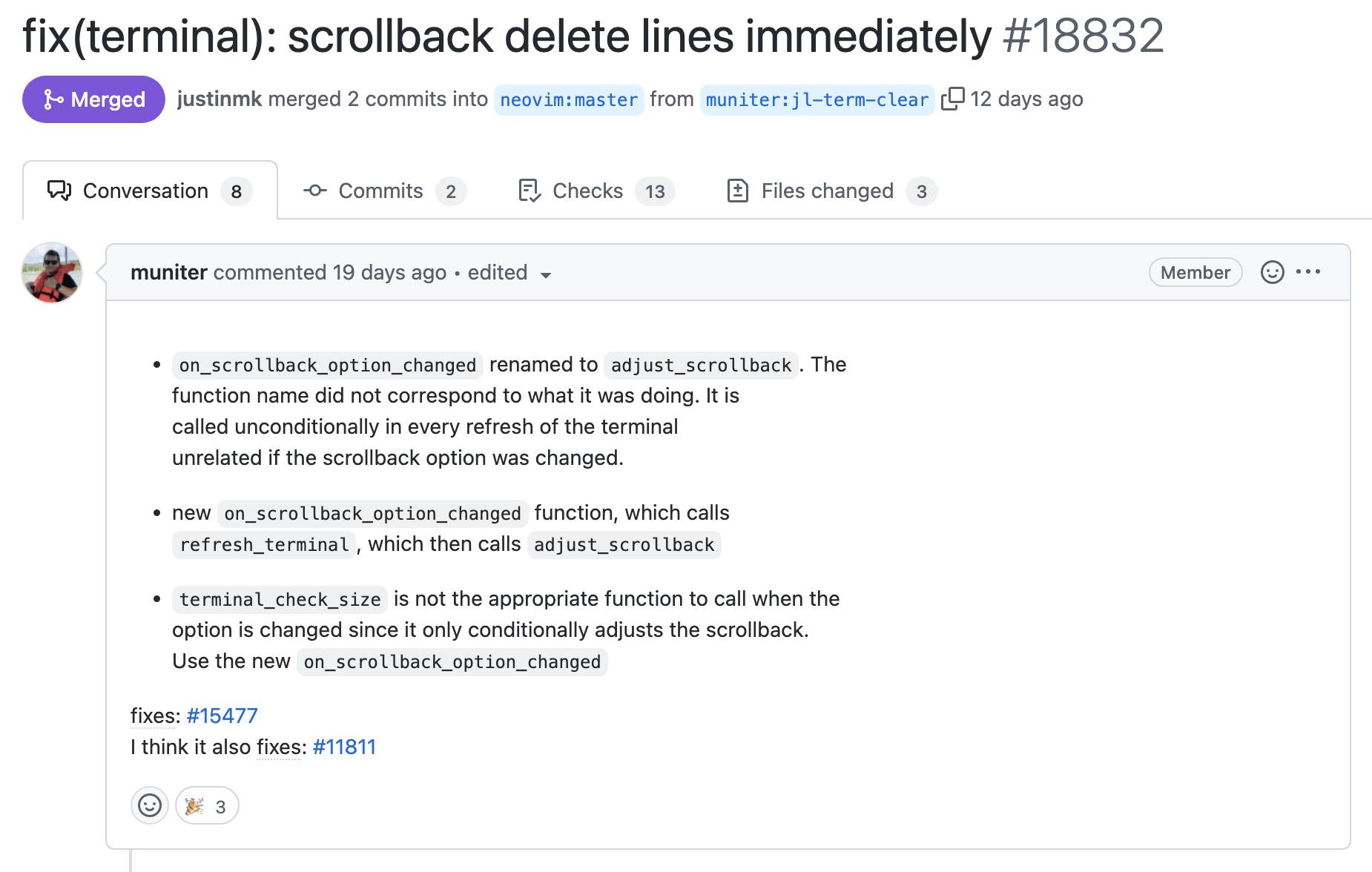 Next, we see that the code reviewer suggests some changes, and explicitly calls out “good ideas” to encourage the contributor.

The reviewer then approves the PR and leaves this final message:

It’s great to see this fixed, thank you! Nice explanation + commit message too.

Another improvement we’ve considered is to debounce the scrollback management #8959 (or ideally put it in a ring buffer, but I’m not sure if that can work with libvterm).

Code review is an excellent technique for improving software quality when done right. Code reviews not only find defects but also helps developers grow by getting them feedback on their code from other developers, spreading code knowledge throughout and are a useful tool for mentoring new team members. Code reviews are part of a healthy engineering culture.

I would love to hear your feedback, comments, thoughts on conducting effective code reviews. Please leave a comment below sharing your experience or anything that would add value to this article and its future readers.

I’m rather an idealist. I tend to point out details in code review like “empty blocks” or misspelling in comment. People might find it offensive, rude etc.

what’s you experience in that ?

I definitely look for spelling mistakes in variables and other identifiers. Similarly, comments are code documentation and should be free of spelling errors. I wouldn’t consider it pedantic, just good practice :-) It takes one broken window to convey sense of abandonment or that “no one here cares”. (https://pragprog.com/the-pr…

Most modern IDEs (IntelliJ) will detect misspelled words so its not that difficult. Also, to conform code to common style (i.e. remove empty blocks), consider integrating a ‘style checker’ (https://github.com/google/s… into your build process.

I hope this helps.

Reply
Checked vs Unchecked Exceptions in Java. Why it's so Confusing
Developing Sense of Ownership in Employees - Let Your People 'Own' It!