The single most important thing to keep in mind when you are creating a finite automaton to recognize a regular language is the following:

Each state represents a property describing a prefix of the input string.

The idea is that when the automaton is in a particular state, we know something specific that must be true of the part of the input string that has been processed by the automaton.

Now, we need to think of the effect that following a transition and consuming an input symbol will have about the automaton’s knowledge of whether there are an even or odd number of b’s. A transition on a does not affect the number of b’s, so the automaton can stay in the same state:

However, a transition on b will change the number of b’s seen by the automaton from even to odd. We need a new state to represent this possibility. Again, we will label it with the fact about the input string that it represents:

From this new state, we again think about what happens when the automaton follows a transition and consumes an input symbol. Like the first state, an a doesn’t change the number of b’s, and the automaton stays in the same state, while a b changes the number of b’s seen from odd to even. We could make a new state for this second possibility (even b’s):

However, making a new state is unnecessary, since we already have a state that represents an even number of b’s:

This is an important principle in designing finite automata: an automaton should have exactly one state that represents any particular property about the input string. Reusing states where possible results in a simpler automaton.

To complete our automaton, we need to designate one or more states as final (accepting) states. If processing of an input string ends in the “Even # of b’s” state, then it automaton should accept it, so that state should be marked as a final state. If processing ends in the “Odd # of b’s” state, then the string should be rejected, so that state should not be a final state:

In the last lecture, we discussed that a nondeterministic choice in a finite automaton could be thought of splitting into “parallel universes”.

Another way to think of nondeterminism is that the NFA is in multiple states at the same time. For example, if a state q0 has an ε-transition to another state q1, then any time the automaton is in state q0, it is also in state q1.

[Show an example of an NFA processing a string.]

Converting an NFA to a DFA

Here is a sketch of an algorithm to convert an NFA into a DFA. This algorithm uses the same basic idea as simulating the execution of an NFA by keeping track of sets of states that the NFA is in. However, instead of using the simulation to process an input string, the simulation is used to convert sets of NFA states into a single equivalent DFA state, for all possible sets of paths through the NFA. 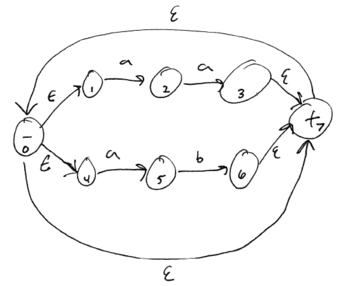 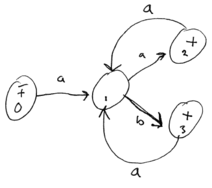