Let’s consider each of these problems.

For a language with only a small number of operator precedence levels, using a separate nonterminal for each precedence level isn’t too bad. For example, our example expression grammar has three precedence levels: Factors (literals and variables), Terms (multiplication and division), and Expressions (addition and subtraction).

Another problem with using nonterminals to represent precedence levels is that they can create long chains of useless nonterminal nodes in the parse tree. For example, consider an expression consisting of a single integer literal. Using the final version of our expression grammar (left-factored and with left recursion eliminated), a derivation for this expression and the resulting parse tree would look like this: 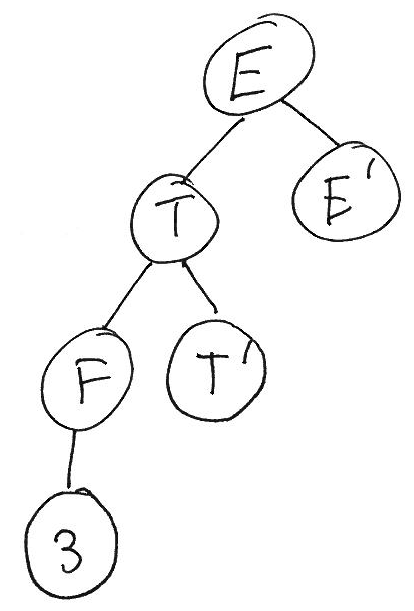 It is important to be clear that there is nothing incorrect about this parse tree. It’s just more complicated than we would like.

Abstract Syntax Trees can help reduce the complexity of the tree by eliminating redundant nodes. However, requiring one nonterminal symbol for each precedence level still makes our grammar and parser more complicated than we would like.

The transformations we made to left factor our expression grammar and eliminate left recursion resulted in an “ugly” grammar.

Consider the derivations and parse trees for the string a + b * 3 in the original grammar and the modified grammar.

Here is the derivation and parse tree for the original grammar: 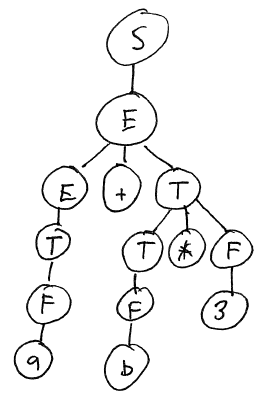 Here is the derivation and parse tree for the transformed grammar (where left recursion is eliminated): 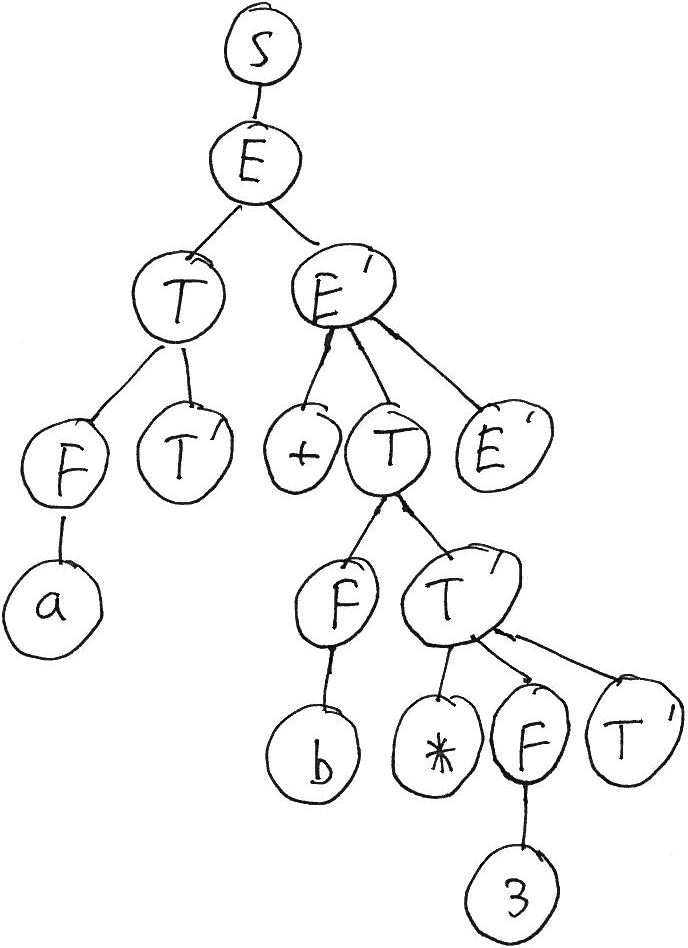 The main problem with the parse tree produced by the transformed grammar is that the operator, which was previously a child of the parent node which joined the subtrees representing the left and right hand operands of the operator, is now attached to the subtree containing the right operand. This makes it somewhat more challenging to interpret the meaning of the parse tree.

We use a language’s grammar for two related, but distinct, purposes:

As we saw with the expression grammar, the meaning of a string is determined by the structure of its parse tree.

A complex grammar leads to complex parse trees. An abstract syntax tree, or AST, is a simplification of a parse tree which eliminates all unnecessary nodes. Typically, in an AST, each node in the tree represents an operation to be performed. The leaves of an AST typically represent “primary” constructs such as literals and variable references: these nodes have a meaning that does not depend on child nodes.

For example, let’s compare the parse tree for a + b * 3 with a possible representation as an abstract syntax tree: 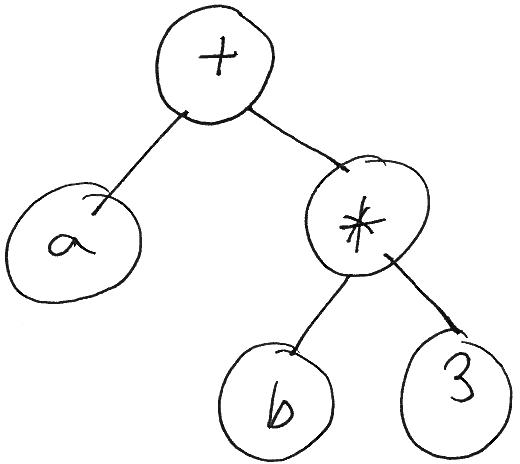 Notice how much simpler the abstract syntax tree is.

Because ASTs are simpler than parse trees, most programming language implementations (interpreters and compilers) use ASTs as the representation of a program’s source code.

Here is the pseudo-code (from the Wikipedia article):

The parse method in the Parser class implements the algorithm:

This is a straightforward translation of the pseudo-code into Ruby.

The _prec and _assoc methods specify the precedence and associativity of operators. For example, here is the _prec method:

This is one of the main strengths of precedence climbing: new operators and precedence levels can be added by modifying this method.

Another advantage of precedence climbing is that it produces very simple parse trees. Each operator is represented by a nonterminal node labeled with the operator. Each operator node has two children which represent the operands. For example, the expression

Note how much simpler this is than the tree produced by recursive descent! In fact, this tree is essentially an abstract syntax tree: there is no redundant information at all.