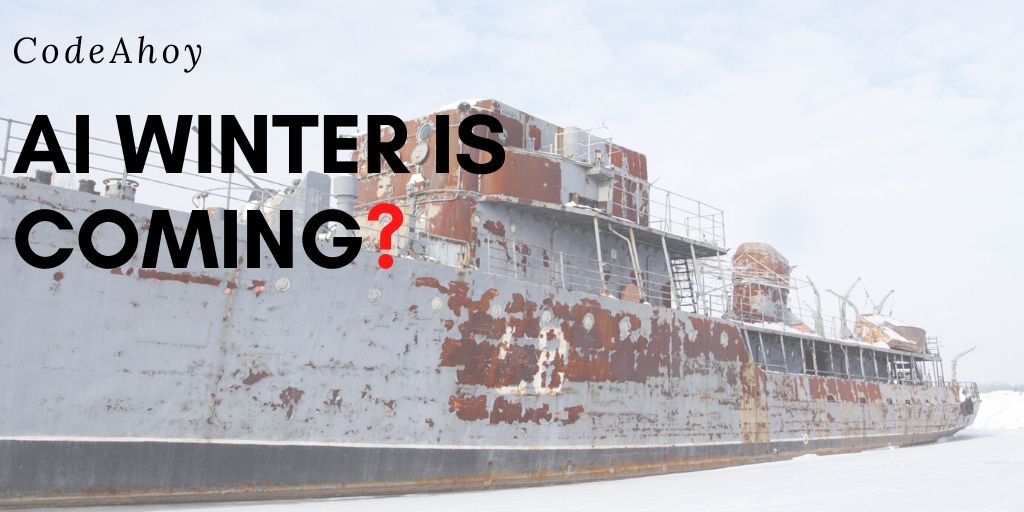 What is AI Winter?

AI winter is a period of ‘reduced funding and interest in the field of artificial intelligence.’ AI winters are preceded by hype cycles and ambitious claims of what AI can do. Money into research and AI companies pours in and expectations are inflated. But it doesn’t last and after a while, pessimism takes over the community and spreads to press, investors and government. Budgets are slashed, funding is stopped and AI research virtually dries up. There have been two AI winters: first one in the 1970’s and the last one was in the 1980’s.

Is Another AI Winter Coming?

We are there again as far the hype is concerned. There has been no shortage of buzz around AI in the past few years. Everyone, everywhere is talking about AI and how it can predict revenues, increase sales, create chatbots who can do natural language conversations like just like real customer service people.

Is the boom going to end soon? Andrew Ng, chief scientist at Baidu research and a prominent figure in the AI community doesn’t think so. The advancements in computing power and availability of huge amounts of training data are providing “the fuel required to make emerging AI techniques feasible.”

“There are multiple experiments I’d love to run if only we had a 10-x increase in performance,” Ng adds. For instance, he says, instead of having various different image-processing algorithms, greater computer power might make it possible to build a single algorithm capable of doing all sorts of image-related tasks.

“There’s definitely hype,” adds Ng, “but I think there’s such a strong underlying driver of real value that it won’t crash like it did in previous years.”

Andrew Ng have good reasons to be optimistic. So let’s look at the other side of the coin and some recent AI misses. Consider the case of IBM Watson and claims that it’s going to eradicate cancer:

It was one of those amazing “we’re living in the future” moments. In an October 2013 press release, IBM declared that MD Anderson, the cancer center that is part of the University of Texas, “is using the IBM Watson cognitive computing system for its mission to eradicate cancer.”

Well, now that future is past. The partnership between IBM and one of the world’s top cancer research institutions is falling apart. The project is on hold, MD Anderson confirms, and has been since late last year. MD Anderson is actively requesting bids from other contractors who might replace IBM in future efforts. And a scathing report from auditors at the University of Texas says the project cost MD Anderson more than $62 million and yet did not meet its goals.

In one of the many Watson ad campaigns IBM ran, Watson tells Bob Dylan that he has read all his lyrics and that the meaning of Dylan’s music is all about ‘time passing and love fading.’

Did Watson get it right? Roger Schank disagrees:

Really? I am a child of the 60s’ and I remember Dylan’s songs well enough. Ask anyone from that era about Bob Dylan and no one will tell you his main theme was “love fades”. He was a protest singer, and a singer about the hard knocks of life. He was part of the anti-war movement. Love fades? That would be a dumb computer counting words. How would Watson see that many of Dylan’s songs were part of the anti-war movement? Does he say anti-war a lot? He probably never said it in a song.

IBM Watson is a good product and I won’t be so harsh on it. Their ads and marketing efforts got lots of people and companies interested in AI. A colleague of mine told me that his CEO rolled his eyes (metaphorically speaking) when he told him to use machine learning to make predictions about customer behavior and revenue a few years ago. While he will never know for sure if it was because of IBM PR, but the CEO changed his mind recently and now thinks of AI as crystal ball that will transform his business and bring millions and millions of dollars in revenue.

AI is not magic. It’s just science and mathematics.

I used Watson to build a gaming chatbot with AI that could have conversations with users on a small number of topics. Watson uses Natural Language Processing and Machine Learning algorithms to understand user messages and requires lots of training. We weren’t able to get it to converse at a level of a 2 or 3-year old and it was easily confused. In the end, we decided to use a cloud based API called Wit.ai which gave us pretty much the same results as Watson.

Chatbots with AI replacing humans to provide customer service is a long, long shot. That doesn’t mean that chatbots or AI isn’t useful. Even if chatbots can increase 1%-2% of customer service efficiency for a major enterprise, it will result in huge savings. Chatbots can troubleshoot simple issues or prescreen users before passing them off to a live agent. Richard Socher, chief scientist at Salesforce said:

“If we were to make the 150,000 companies that use Salesforce 1 percent more efficient through machine learning, you would literally see that in the GDP of the United States,” he says.

Hype wasn’t the only reason for the last two AI winters, although it did play a big hand. It initially fueled the interest but failed to live up to the expectations and didn’t provide real value to corporations and government. While the hype has outpaced the reality once again, it is different this time. Aside from obvious beneficiaries like Google, Amazon, Microsoft and Tesla who are sitting on mountains of data and resources, medium to small sized companies are applying AI into direct actions to grow revenue and see positive ROI. In the mobile gaming domain, publishers and studios are experimenting with dynamic pricing for in-app purchases. For a large gaming company, even a slight improvement over traditional models such as segmented or A/B pricing, boosts revenue. Likewise, mobile operators are using machine learning to predict when prepaid subscribers will next recharge and use this prediction to grant or deny loans.

Is another AI winter on the horizon? I don’t think so. In fact I believe the interest, investment and research will continue to grow. It is already providing immense utility to not just the big corporations or companies building self-driving cars, but to companies of all sizes and in different industries.

However, we must curb our expectations a little. AI won’t out-think humans anytime soon, understand deep meaning of music, eradicate cancer, or replace customer service people entirely, but it will instead provide real value in many domains and incremental improvements.

AI is not magic and the hype will die down, but the next AI winter will be more like California winter, not Canadian.

Fix Employee Weaknesses or Focus on Their Strengths?
AI Is Not Magic. How Neural Networks Learn