Last month, I wrote a blog post called Technical Debt is Soul-crushing. In it, I discussed the effects of tech debt on software developers and how it makes them unhappy. I wrote it because, being in management for several years now, I have seen how people discuss tech debt as a product or engineering problem. They completely overlook or ignore its impact on people.

For software developers, it is very frustrating to work on a codebase that has a high amount of tech debt. They feel unproductive and handicapped. This creates an atmosphere where people start thinking about leaving and they do soon as they find a better option.

Because the blog post was getting good amount of traffic (10k views in a week), I decided to add a survey. The survey is closed and the results are in.

No large software is tech debt free. At least, I haven’t come across one in my life. Some have more, others have less.

Not a single person said that their product contains ‘No tech debt’. 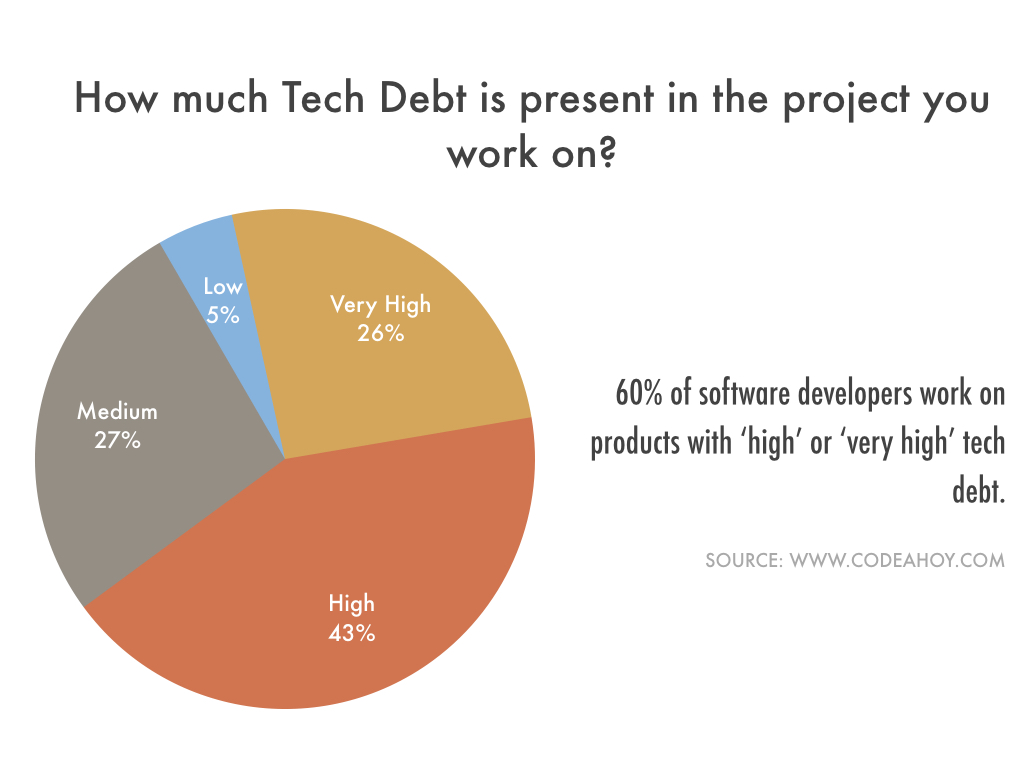 27% percent indicated that they think about it, but aren’t sure. 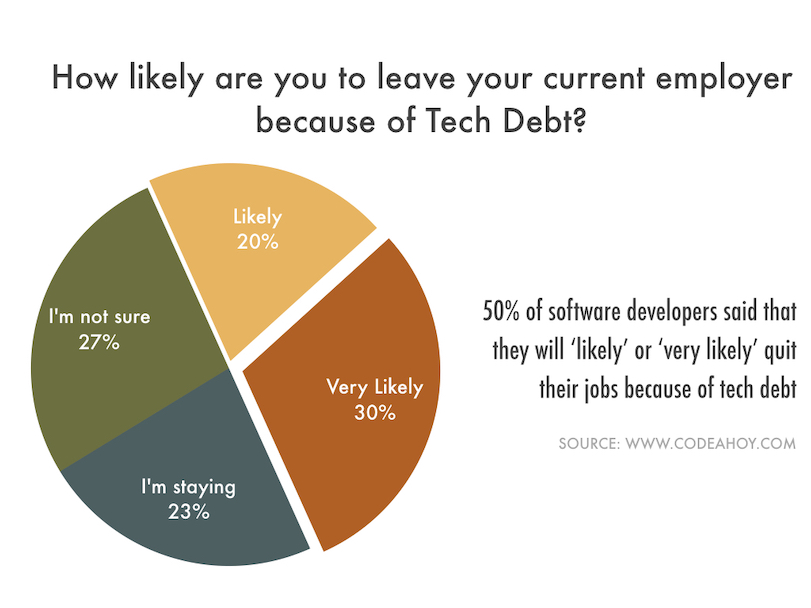 Question: Is Your Management Aware of Tech Debt and Are They Taking Action to Pay It Off?

I asked this question to see if there’s a correlation between developer dissatisfaction and management or leadership being aware of the problem and taking action to pay it off. Here are the results. 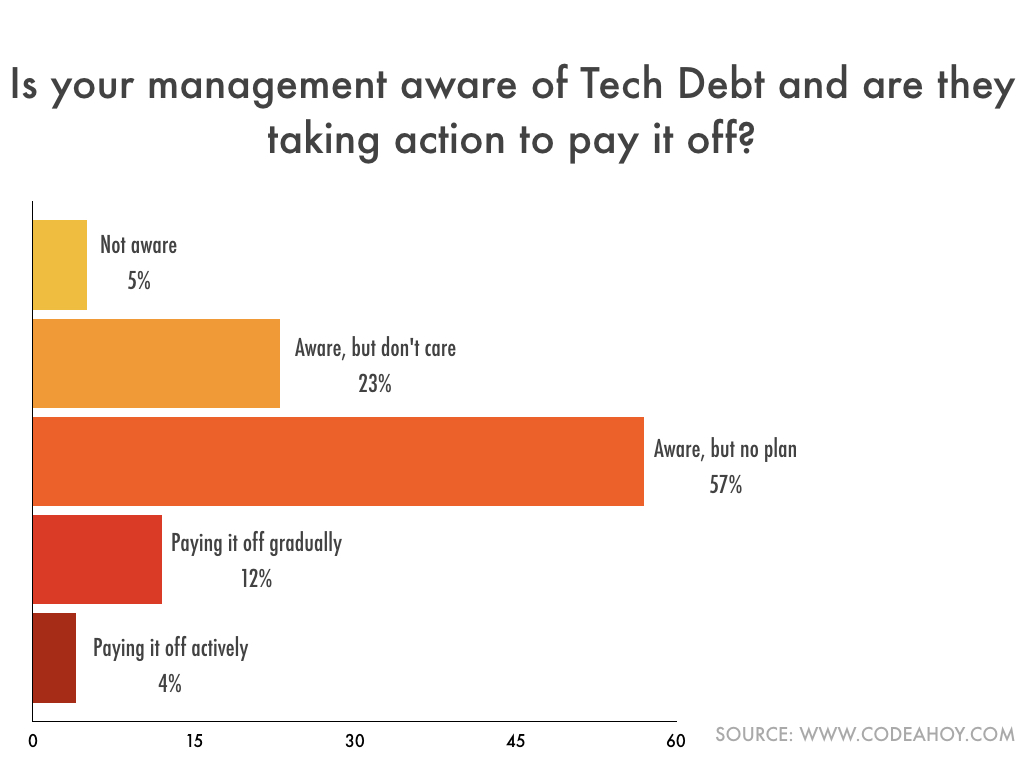 Question: How Long Have You Been Working on the Product with Tech Debt?

Here are the results. 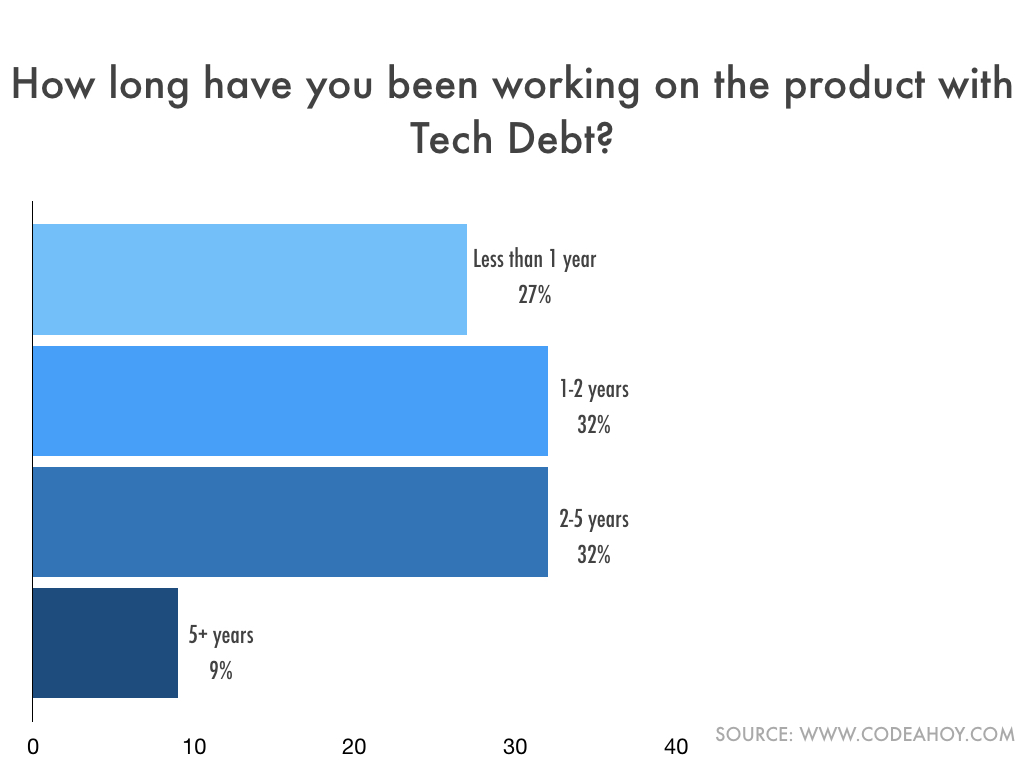 117 software developers from all over the world took the survey. The majority were from the USA, followed by Canada, Australia, Germany, India, Russia , UK and other European countries.

I asked survey participants to identify the type of tech debt present in their project. Here are some of their responses.

Other Comments from the Survey

I asked readers to leave comments on the survey. Here are some of their comments.

Here are some comments I liked from other sites.

The system I’m working on is indeed soul-crushingly burdened. Everyone knows this: there’s a survey every year and “crushing technical debt” is always the top complaint. I mention it to the bosses, and they go “yeah, we know.” I say we never seem to schedule time to fix it, and I’m told “you’re not in the same meetings we are.” Yeah, but I’m the one that would be fixing it, if we were fixing it, eh?

Now I’ve started actually dealing with the management by treating the debt like it’s impactful.

“How long will it take to do X?” “I can’t predict. The thing that should have taken a day last time took three weeks.”

“Why did the system break?” “Shitty architecture from the start mandated making changes that are impossible to test, and our tests are so flakey it’s impossible to tell whether anything’s broken, so we pushed it out to prod and waited to see who complained about which feature.”

Without something like that, management never actually feels the pain, never understands that it’s not just something hard they’re asking for, but an interlocking tangle of shortcuts that make things 100x as hard to accomplish as they should be.

Oh, I understand this so much. . I am A data analyst who does a lot of programming. We automate Excel spreadsheets and databases tools and stuff using VBA and Python and SQL. The guy before me was not a programmer at all as is often the case in people who develop automated Excel spreadsheets with VBA. Every tool that the client has asked me to update is so horrible that I can’t even Trace through the code To figure out where I can insert a feature. It’s like a puzzle that has no logical solution.

Some of the code has variables that are sprinkled all over that have the same name and then he just repurposes them with new names. I swear all over the code There are blocks that look like this:

Instead of using modular functions and subroutines, every single function is repeated over and over with small modifications made. Because of that the code base is probably 30 times longer than it should be.

The worst part is throughout the code there are comments saying this should be fixed or that should be made better, but it was never done.

I like my job for several reasons, but this code I have to work with causes me to think about quitting probably every month or two.

New features winning over fixing tech-debt is a very common observation. I think fixing tech-debt has to do with the business strategy of rationalizing products as well. In many cases the application (with tech-debt) in question may not be bringing in the kind of revenue it was several years ago. At some point a portfolio approach should eliminate such products and refocus efforts toward new innovation, thereby eliminating tech-debt.

This is a very good case study on tech debt. My manager (and his management) is purely “business impact” driven and doesn’t realize that you gotta slow down sometimes so you can sprint later. our company is planning IPO and the VPs strongly implied its ok to build a ton of tech debt. I and many other developers are sick and looking elsewhere. anyone hiring?

The “Types of Tech Debt” section is really interesting to me because describing tech debt is usually pretty difficult, but every software developer knows it when they see it! Describing tech debt to non-developers is even more difficult, maybe because there aren’t many ways of directly measuring it. Perhaps the age of TODO comments in the code, or time to merge/ship new features? Neither of those “directly” measure the developer satisfaction though

I’m glad I’m not the only one thinking the same thing. From my work, the systems are at least 15 years old and entire architecture of the system that needs to be thrown away.

I hear you Chris, you’re far from the only one :) Working on systems with high tech debt is soul crushing for developers.

To your second point: retiring an old system all at once is very risky. A better approach is to incrementally rewrite and gradually replace legacy systems. I have not yet come across a system that could not be retired and replaced this way.