In this chapter, we’ll cover implementing graphs and graph algorithms in C.

A graph consists of a set of nodes or vertices together with a set of edges or arcs where each edge joins two vertices. Unless otherwise specified, a graph is undirected: each edge is an unordered pair {u, v} of vertices, and we don’t regard either of the two vertices as having a distinct role from the other. However, it is more common in computing to consider directed graphs or digraphs in which edges are ordered pairs (u, v); here the vertex u is the source of the edge and vertex v is the sink or target of the edge. Directed edges are usually drawn as arrows and undirected edges as curves or line segments. It is always possible to represent an undirected graph as a directed graph where each undirected edge {u, v} becomes two oppositely directed edges (u, v) and (v, u).

Here is an example of a small graph: 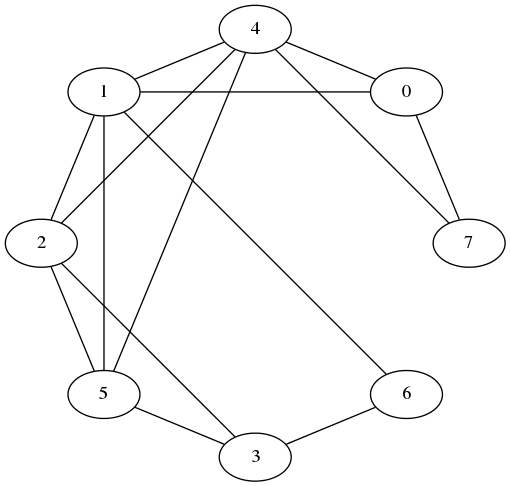 Here is a similar directed graph: 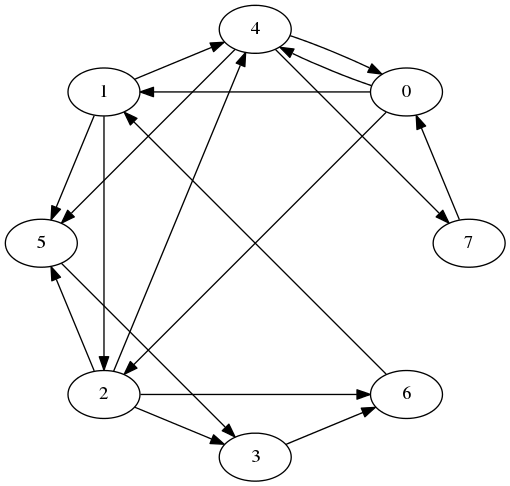 Why graphs are useful

Graphs can be used to model any situation where we have things that are related to each other in pairs; for example, all of the following can be represented by graphs:

Nodes are members, with an edge from each parent to each of their children.

Suppose we are assigning classes to classrooms. Let each node be either a class or a classroom, and put an edge from a class to a classroom if the class is assigned to that room. This is an example of a bipartite graph, where the nodes can be divided into two sets S and T and all edges go from S to T.

What would we like to do to graphs? Generally, we first have to build a graph by starting with a set of nodes and adding in any edges we need, and then we want to extract information from it, such as “Is this graph connected?”, “What is the shortest path in this graph from s to t?”, or “How many edges can I remove from this graph before some nodes become unreachable from other nodes?” There are standard algorithms for answering all of these questions; the information these algorithms need is typically (a) given a vertex u, what successors does it have; and sometimes (b) given vertices u and v, does the edge (u, v) exist in the graph?

A good graph representation will allow us to answer one or both of these questions quickly. There are generally two standard representations of graphs that are used in graph algorithms, depending on which question is more important.

For both representations, we simplify the representation task by insisting that vertices be labeled 0, 1, 2, …, n − 1, where n is the number of vertices in the graph. If we have a graph with different vertex labels (say, airport codes), we can enforce an integer labeling by a preprocessing step where we assign integer labels, and then translate the integer labels back into more useful user labels afterwards. The preprocessing step can usually be done using a hash table in O(n) time, which is likely to be smaller than the cost of whatever algorithm we are running on our graph, and the savings in code complexity and running time from working with just integer labels will pay this cost back many times over.

An adjacency matrix is just a matrix a where a[i][j] is 1 if (i,j) is an edge in the graph and 0 otherwise. It’s easy to build an adjacency matrix, and adding or testing for the existence of an edges takes O(1) time. The downsides of adjacency matrices are that finding all the outgoing edges from a vertex takes O(n) time even if there aren’t very many, and the O(n2) space cost is high for “sparse graphs,” those with much fewer than n2 edges.

An adjacency list representation of a graph creates a list of successors for each node u. These lists may be represented as linked lists (the typical assumption in algorithms textbooks), or in languages like C may be represented by variable-length arrays. The cost for adding an edge is still O(1), but testing for the existence of an edge (u, v) rises to O(d+(u)), where d+(u) is the out-degree of u (i.e., the length of the list of u’s successors). The cost of enumerating the successors of u is also O(d+(u)), which is clearly the best possible since it takes that long just to write them all down. Finding predecessors of a node u is extremely expensive, requiring looking through every list of every node in time O(n + m), where m is the total number of edges, although if this is something we actually need to do often we can store a second copy of the graph with the edges reversed.

Adjacency lists are thus most useful when we mostly want to enumerate outgoing edges of each node. This is common in search tasks, where we want to find a path from one node to another or compute the distances between pairs of nodes. If other operations are important, we can optimize them by augmenting the adjacency list representation; for example, using sorted arrays for the adjacency lists reduces the cost of edge existence testing to O(log (d+(u))), and adding a second copy of the graph with reversed edges lets us find all predecessors of u in O(d−(u)) time, where d−(u) is u’s in-degree.

Here is an implementation of a basic graph type using adjacency lists.

And here is some test code: graphTest.c.

For some graphs, it may not make sense to represent them explicitly. An example might be the word-search graph from, which consists of all words in a dictionary with an edge between any two words that differ only by one letter. In such a case, rather than building an explicit data structure containing all the edges, we might generate edges as needed when computing the neighbors of a particular vertex. This gives us an implicit or procedural representation of a graph.

Implicit representations require the ability to return a vector or list of values from the neighborhood-computing function. There are various way to do this, of which the most sophisticated might be to use an iterator.

Searching for paths in a graph

A path is a sequence of vertices v1, v2, …vk where each pair (vi, vi + 1) is an edge. Often we want to find a path from a source vertex s to a target vertex t, or more generally to detect which vertices are reachable from a given source vertex s. We can solve these problems by using any of several standard graph search algorithms, of which the simplest and most commonly used are depth-first search and breadth-first search.

Both of these search algorithms are a special case of a more general algorithm for growing a directed tree in a graph rooted at a given node s. Here we are using tree as a graph theorist would, to mean any set of k nodes joined by k − 1 edges. This is similar to trees used in data structures except that there are no limits on the number of children a node can have and no ordering constraints within the tree.

The general tree-growing algorithm might be described as follows:

Practically, steps 2 and 3 are implemented by having some sort of data structure that acts as a bucket for unprocessed edges. When a new node is added to the tree, all of its outgoing edges are thrown into the bucket. The “best” outgoing edge is obtained by applying some sort of pop, dequeue, or delete-min operation to the bucket, depending on which it provides; if this edge turns out to be an internal edge of the tree (maybe we added its sink after putting it in the bucket), we throw it away. Otherwise we mark the edge and its sink as belonging to the tree and repeat.

The output of the generic tree-growing algorithm typically consists of (a) marks on all the nodes that are reachable from s, and (b) for each such node v, a parent pointer back to the source of the edge that brought v into the tree. Often these two values can be combined by using a null parent pointer to represent the absence of a mark (this usually requires making the root point to itself so that we know it’s in the tree). Other values that may be useful are a table showing the order in which nodes were added to the tree.

What kind of tree we get depends on what we use for the bucket—specifically, on what edge is returned when we ask for the “best” edge. Two easy cases are:

Structurally, these algorithms are almost completely identical; indeed, if we organize the stack/queue so that it can pop from both ends, we can switch between depth-first search and breadth-first search just by choosing which end to pop from.

The running time of any of these algorithms is very fast: we pay O(1) per vertex in setup costs and O(1) per edge during the search (assuming the input is in adjacency-list form), giving a linear O(n + m) total cost. Often it is more expensive to set up the graph in the first place than to run a search on it.

Implementation of depth-first and breadth-first search

Here is a simple implementation of depth-first search, using a recursive algorithm, and breadth-first search, using an iterative algorithm that maintains a queue of vertices. In both cases the algorithm is applied to a sample graph whose vertices are the integers 0 through n − 1 for some n, and in which vertex x has edges to vertices x/2, 3 ⋅ x, and x + 1, whenever these values are also integers in the range 0 through n − 1. For large graphs it may be safer to run an iterative version of DFS that uses an explicit stack instead of a possibly very deep recursion.

Here are the pictures for n = 20.

These are some older implementations of BFS and DFS that demonstrate how both can be written using the same code just by changing the behavior of the core data structure. This also demonstrates how to construct DFS iteratively; for BFS, the preceding implementation is better in every respect.

Other variations on the basic algorithm

Stacks and queues are not the only options for the bucket in the generic search algorithm. Some other choices are: