Analysis of algorithms is the study of how algorithms behave when they are executed. One of the most important characteristics of any algorithm is how long the algorithm will require to complete when run on an input of a particular size. In particular, we would like to know how the running time of an algorithm increases as the input size increases.

The basic idea is that as calls to the add method are made, the added element values are stored in the first unused element of the storage array. When the current storage array becomes full, a new (larger) one is allocated by the private grow method.

The get and set methods simply retrieve elements from and store elements to elements of the storage array.

The remove method takes an integer index, and removes the element at that index from the ArrayList. Any elements to the right of the index must be moved over one position to the left. The removed element is returned.

Analysis of the remove algorithm

We can think of the remove method as implementing an algorithm: the ArrayList remove algorithm.

When the program calls the remove method, how long will it take to complete? This depends on a wide variety of factors:

Because of the number of factors involved, this question cannot be answered precisely.

We can still usefully characterize the performance of the underlying algorithm by removing from consideration all of the incidental factors (how fast the CPU is, etc.) and focusing on the mathematical parameters of the algorithm. We have two such parameters:

If we plot this function, it looks like this: 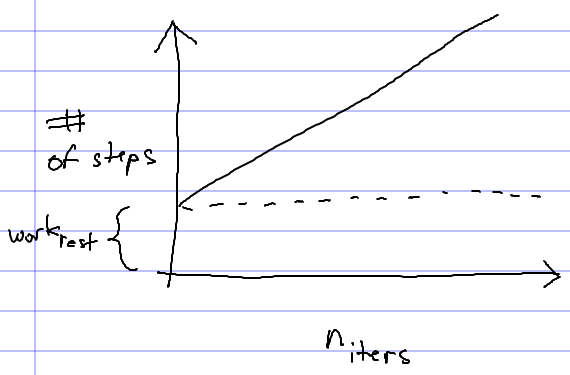 So, what is niters? It is a function of two parameters:

where n is the number of elements in the ArrayList, and i is the index of the element being removed.

So, when we call remove on an ArrayList with n/i elements, it will take a constant amount of time to remove the last element, and time proportional to n - 1 to remove the first element. This makes sense: more work is required to shift over the elements to the right of the one we’re removing the closer the removed element is to the beginning of the array.

Typically, what we want to know when analyzing the running time of an algorithm is the worst-case running time; what is the maximum number of steps that will be required for the algorithm to complete. For the ArrayList remove algorithm, the worst case is removing the first element, which (as mentioned above) requires time proportional to

The sum of the series

So, the average case running time works out to

Algorithm analysis refers to examining an algorithm and determining, as a function of the size of its input, how many steps the algorithm will take to complete.

Usually, we are interested in the worst case: the absolute upper limit for how many steps the algorithm will take.  Sometimes we may be interested in the average case, although what constitutes the average case can be difficult to define and complicated to analyze.  The worst case is usually fairly easy to figure out, and algorithms with good worst case behavior give us confidence that our program will run efficiently no matter what input we give it.

A simple example: a linear search for an array element matching a specified value:

In the worst case (the array doesn’t contain the element we’re looking for), the loop will execute once for each element of the array.  Each loop iteration executes 1 statement (the if).  So, the worst case running time of this algorithm is

where N is the length of the array.  (We tacked on an extra step for the return statement at the end.)

A more complicated case: finding out whether or not an array contains duplicate elements:

This algorithm is harder to analysis because the number of iterations of the inner loop is determined by which iteration of the outer loop is executing.

Tacking on an extra step for the final return statement and putting the terms in canonical order, we get a worst case cost of

where N is the length of the array.

Visually, f(n) is an upper bound for T(n) once we reach some sufficiently large value of n: 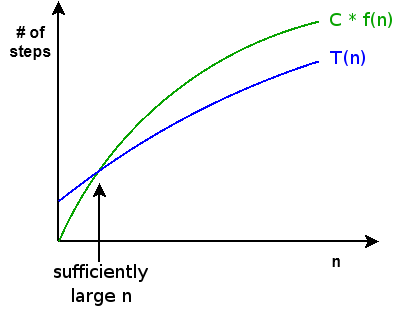 Finding the big-O bound for an algorithm is really easy, once you know its exact cost:

You can find the high order term according to the following inequalities (assume k > 1, j > k):

So, our algorithm to search an array for a specified element is O(N), and the algorithm to determine whether or not an array has duplicate elements is O(N2).  In the second case, we had both N and N2 terms, but N2 dominates N.

One of the nice things about analysis using big-O is that you can immediately drop low order terms.  For example, it is perfectly valid to say things like:

In the following method, let the problem size N be rowsCols, which is the number of rows and columns in the square two-dimensional array matrix.

Also: would our answer be different if N was the number of elements in matrix?

Again: would the answer be different if N was the number of elements in the two arrays?

Assume that, in the following algorithm, the problem size N is the number of elements in the array.