An ArrayList is a random-access data structure: we can efficiently (O(1)) access any element in the collection.  However, arbitrary removals are not efficient.

A LinkedList is a sequential-access data structure: we can efficiently access one element after another (starting at the beginning, or either end for a doubly-linked list).  Arbitrary removals are efficient (O(1)) if we have an iterator positioned at the location of the removed element.

Stacks and queues are abstract data types representing a collection of elements providing restricted access to the elements:

[Note: in Java, java.util.Stack is actually a concrete class, not an interface. However, it supports all of the above methods.]

Analogy: cafeteria trays.  You can put a new tray on top, or take the top tray off, but you can’t access any of the trays underneath:

When we draw a stack visually, it looks like a bucket with a stack of elements inside.  For example, here is the stack that would result by performing the operations

on an empty stack:

“C” is the top element in this stack.

Stacks are useful in situations where earlier input must be balanced with later input.

If you see a closing delimiter when the stack is empty, that means you saw something like this:

If the stack is not empty at the end of the input sentence, then there was an opening delimiter with no matching close delimiter:

Try this algorithm on paper to convince yourself that it works.

When a precondition of a method is violated, the right thing to do is to throw a RuntimeException (or a subclass).  Violations of preconditions and postconditions are bugs in the program, so a runtime exception makes sure that the bug is obvious when the program is executed.

So, depending on whether the list implementation is array-based or linked-list-based, we can map the stack operations onto list operations as follows:

An implementation based on LinkedList would be very similar, except that we’d push to and pop from the beginning (head) of the list, since that’s guaranteed to be efficient for both singly- and doubly-linked lists.

Element values enter at one end of the queue and leave at the other.  It’s like a line at a bank; customers are served in the order in which they enter the line.

The usual way to draw a queue is as follows:

This queue shows the results of enqueuing (adding) “A”, then “B”, then “C” to the queue.

Interestingly: we can easily adapt a linked list to implement a queue:

However, there is no way to adapt an array-based list directly and still get O(1) running time for the queue operations.  The problem is that element values must be enqueued (added) and dequeued (removed) at different ends of the list.

There is a clever way to implement a queue using an array: treat the array as “circular”.  Here’s a circular array with 10 elements. 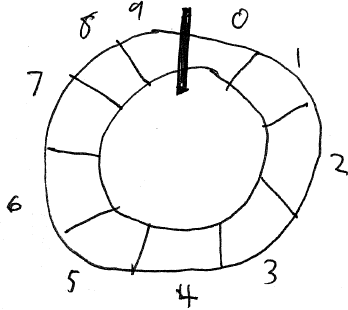 The idea is that each element has a successor: element i’s successor is i+1, except when i == N-1 (where N is the length of the array), in which case its successor is 0.

“Wrapping around” allows enqueue and dequeue operations to proceed without the need to shift elements around.