Insertion Sort is a simple sorting algorithm which is O(N2) in both the worst case and the average case. We also looked at Shell Sort, an efficient variation of Insertion Sort.

These algorithms are optimal because O(N log N) is the best asymptotic upper bound that it is possible to achieve for sorting.

Here is an Eclipse project that has animated demonstrations of several sorting algorithms, including merge sort and quick sort: 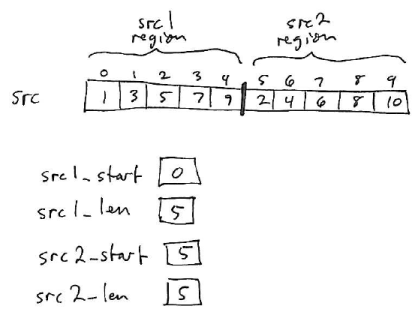 The merged sequence of elements will be placed in a region of the destination array starting at dest_start.

The merge algorithm has three loop variables: i, j, and k. k refers to the element where the next merged value will be placed in the destination array. i and j refer to elements in the the src1 and src2 regions of the source array. 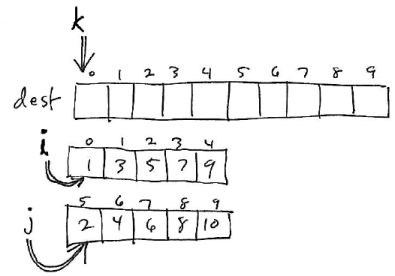 On each iteration of the loop, the algorithm looks at the values at i and j. Whichever is the smallest is placed in the merged region, and the appropriate index variable (i or j) is incremented. Special cases arise when one of the two source regions no longer contains any elements.

Here is how the example presented above would look after 3 iterations of the loop: 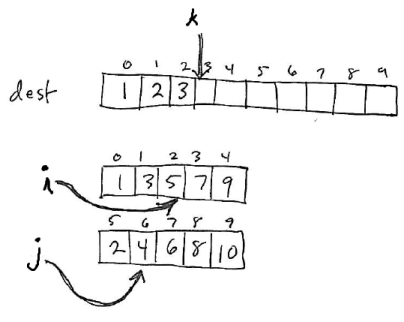 3 elements from the src1 and src2 regions have been copied into the destination region.

Once we have defined the merge operation, merge sort is a very simple algorithm. It works using a temporary array (or array list) the same size as the overall array being sorted. The algorithm is defined recursively:

Because the algorithm works by dividing the overall problem into (roughly) equal-size chunks, it is a divide and conquer algorithm.

The O(N log N) worst case upper bound on merge sort stems from the fact that merge is O(N).

One disadvantage of Merge Sort is the need for the temporary array to store the merged elements, which requires O(N) space.

We can also define a variation of the merge algorithm that can merge chains of linked list nodes in O(N) time. So, it is possible to merge sort the elements of a linked list in O(N log N) time.

Quick sort is another divide-and-conquer sorting algorithm based on the partition operation. For each array region to be sorted using quick sort, a pivot element is selected. (The pivot can be any element of the region.) The region is arranged so that all elements less than the pivot are placed before the pivot, and all elements greater than the pivot are after the pivot. This can be done in O(N) time for N elements. After partitioning, the region on each side of the pivot is sorted recursively.

Here is an example of a single step in executing quicksort: 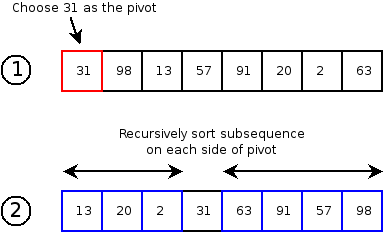 If the choice of pivot always results in equal-sized (or close to equal-sized) partitions before and after the pivot, then quick sort will run in O(N log N) time. (The argument is the same as for Merge Sort.)

Unfortunately, there is no way to guarantee that the pivot will result in this outcome, unless we sort the entire sequence! Choosing a bad pivot—either the min or max element in the region being sorted—would result in subproblems of size 0 and size N-1. If a bad pivot is chosen at every step, then the total running time will be O(N2). (The problem is that we are only eliminating one element, the pivot, at each step!)

One way to address the problem of pivot selection is to sample a small number of elements from the region, and choose the median element as the pivot. While this does not guarantee that the pivot will result in equal sized subproblems, it makes it extremely unlikely that the subproblems will differ greatly in size. For this reason, the expected (average) case running time of quick sort is O(N log N).

The main difficulty in implementing Quick Sort is the partition operation. The idea is to start two index variables (left and right) at either end of the region being partitioned:

One subtlety is what to do with pivot element itself. The textbook suggests moving it to the end of the region initially, and then swapping it with the left index when the loop terminates. This works well: the pivot will be be left in the correct place.

Here’s a possible implementation of the partition algorithm:

Once we have the partition algorithm implemented, implementing Quick Sort is easy: