Inheritance is an IS-A relationship between two classes.

For example, consider the classes Vehicle, Car, Boat, and Airplane. 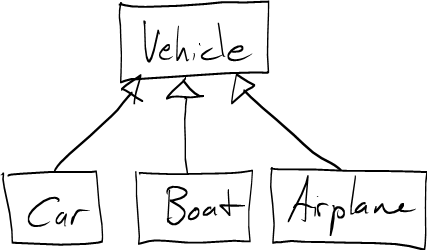 The Car,. Boat, and Airplane classes inherit from the Vehicle class.

In this class hierarchy, Vehicle is the superclass of Car, Boat, and Airplane.

Equivalently, Car, Boat, and Airplane are subclasses of Vehicle.

Because classes are data types, we also describe an inheritance relationship as a supertype/subtype relationship.

When Inheritance is Useful

Inheritance is useful when you have a collection of classes which both common characteristics and behavioral differences.

The common characteristics of the classes are embodied in the superclass. The most important kind of commonality in classes related by inheritance is that they support a common set of operations (methods).

These common operations become the methods of the Vehicle class, which is the superclass of all three classes.

There are behavioral differences in the three classes because they implement the common operations differently:

So, for example, if we call the startTrip method on an Airplane object, it will only succeed if the Airplane is currently located at an airport.

Typically, the methods in the superclass that embody the common operations (methods) shared by subclasses will be abstract. This sense of abstract means that there is no way to concretely what the operation does unless we know what kind (subclass) of object it is called on.

For example, if I told you I arrived at work in a Vehicle, that tells you nothing about whether I arrived by ground, air, or water. That’s because you don’t know what specific kind of Vehicle I arrived in.

A simple rule called the Liskov Substitution Principle explains how to use inheritance in a program. It states:

So, if we have a method that takes a parameter whose type is Vehicle, we can pass that method a reference to a Car, Boat, or Airplane, since those are all subclasses of Vehicle.

The Liskov Substitution Principle allows object-oriented programs to exhibit polymorphism. Polymorphism means that a variable with type A might, when the program runs, actually refer to an object of type B, C, D, etc. This is possible as long as B, C, and D are all subclasses of A.

A Trip consists of a sequence of Terrain values:

The isTripPossible method of the Trip class takes a Vehicle as a parameter, and returns true or false depending on whether or not the Vehicle can successfully complete the trip. We see polymorphism at work because an instance of any subclass of Vehicle may be passed to isTripPossible.

We can use the Trip class to write JUnit tests which test the Car class.

For example, a trip starting at an airport, continuing through roads, and ending at a marina is a legal trip. A trip blocked by a terrain type inaccessible to a Car, such as WATER, is not a legal trip.

Inheritance of fields and methods

When a superclass defines a field or non-private method, it is inherited by all subclasses.

Even though Java supports four access modifiers, most of the time you will only use public and private.

Some rules of thumb:

Defining Concrete Fields and Methods in a Superclass

Sometimes it can be useful to define concrete (non-abstract) fields and methods in superclasses.

You should do this only when the field and/or methods represent properties that are truly common to all subclasses.

Now all classes that inherit from the Vehicle superclass will have a double field called maxSpeed, and an instance method called getMaxSpeed which returns the value of that field.

Note that the Vehicle class is still abstract because it has abstract methods.

Invoking a superclass constructor from a subclass

When a superclass has instance fields, these fields exist in all instances of subclasses. So, constructors for subclasses will need a way to initialize these fields.

However, because instance fields are typically private, subclasses cannot access them directly. For example, here is a Car class that does not compile: