The most common way to visually represent graphs is by drawing them. A drawing of a graph maps each vertex to a point in the plane (typically drawn as a small circle or some other shape) and each edge to a curve or straight line segment between the two vertices.

In computer science, graphs are usually represented by one of two standard data structures: adjacency matrices and adjacency lists. At a high level, both data structures are arrays indexed by vertices; this requires that each vertex has a unique integer identifier between 1 and V. In a formal sense, these integers are the vertices.

The adjacency matrix of a graph G is a square-matrix of 0’s and 1’s with a row for every vertex. It’s often represented as a two-dimensional array in computer programs. A[u][v] is 1 if there is an edge from u to v, otherwise it is 0. (In weighted graphs, if A is numeric valued, then A[u][v] would be the weight of the edge (u,v).) 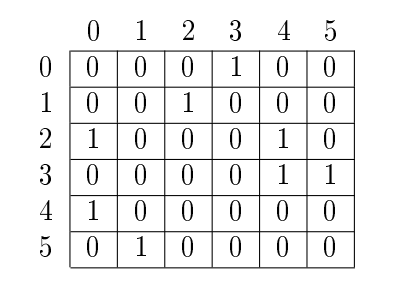