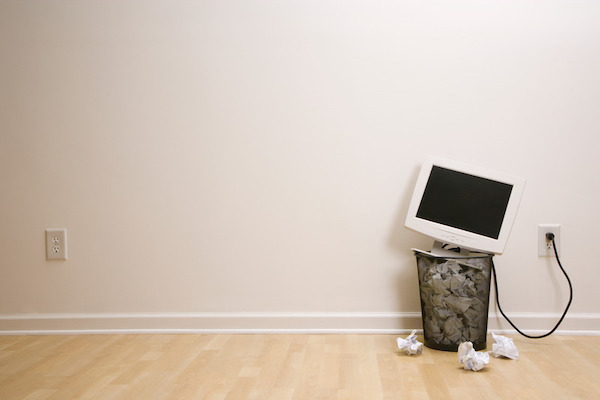 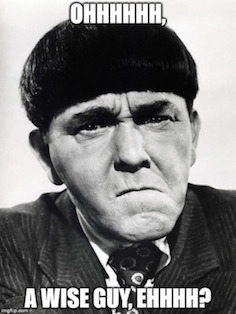 It’s an old joke from the time when Java was new and slow compared to other languages. Over time, Java became a lot faster. Today it powers many real-time applications with hundreds of thousands of concurrent users. These days, the biggest impact on Java’s performance comes from its garbage collection. Fortunately, in many cases, it can be tweaked and optimized to improve performance.

Java ships with several garbage collectors. More specifically, these are different algorithms that run in their own threads. Each works differently and has pros and cons. The most important thing to keep in mind is that all garbage collectors stop the world. That is, your application is put on hold or paused, as the garbage is collected and taken out. The main difference among the algorithms is how they stop the world. Some algorithms sit completely idle until the garbage collection is absolutely needed and then pause your application for a long period while others do most of their work concurrently with your application and thus need a shorter pause during stop the world phase. The best algorithm depends on your goals: are your optimizing for throughput where long pauses every now and then are tolerable or you are optimizing for low latency by spreading it out and having short pauses all along.

To enhance the garbage collection process, Java (HotSpot JVM, more accurately) divides up the heap memory into two generations: Young Generation and Old Generation (also called Tenured). There is also a Permanent Generation, but we won’t cover it in this post.

The reason for having two survivor spaces is to avoid memory fragmentation. Imagine if there was just one survivor space. While you are at it, also imagine survivor space as a contiguous array of memory. When young generation GC runs through the array, it identifies dead objects for removal. This would leave holes in memory where objects previously lived and compaction will be needed. To avoid compaction, HotSpot JVM just copies all surviving objects from the survivor space to the other (empty) survivor space so that there are no holes or empty spaces. While we are discussing compaction, please note that old generation garbage collectors (with the exception of CMS) perform compaction on the old generation section of the heap memory to defragment it.

When this happens, objects are moved to the old generation. (There could be other conditions but I’m not aware of them.) Let’s try to understand with a real example. Suppose we have the following application that creates a few ‘long-lived objects’ during initialization and creates many short-lived during its operation. (E.g. a web server that allocates short-lived objects for each incoming request.)

The application logs showing the state before and after garbage collection are as follows:

Let’s try another experiment. Let’s run an application that is only creating short-lived objects in multiple threads. Based on what we’ve discussed so far, none of these objects should go to the old generation; minor garbage collection should be able to clean them up.

For this example, I’m gave the JVM only 10 MB of memory. Let’s look at the GC logs.

How to prevent premature aging of short-lived objects? There are several ways. One theoretical way is to estimate the number of active short-lived objects and size the young generation appropriately. Let us make the following changes:

The problem was fixed. After 8 minor garbage collections, the old generation space was still empty.

This is in no way an exhaustive method of tuning garbage collection. I’m simply trying to demonstrate the steps involved. For real applications, optimum settings are found as a result of trial and error with different settings. For example, we could have also fixed the problem by doubling the total heap memory size.

serial collector uses a single thread to perform all garbage collection work, which makes it relatively efficient because there is no communication overhead between threads. It is best-suited to single processor machines -XX:+UseSerialGC.

parallel collector (also known as the throughput collector) performs minor collections in parallel, which can significantly reduce garbage collection overhead. It is intended for applications with medium-sized to large-sized data sets that are run on multiprocessor or multithreaded hardware.

concurrent collector performs most of its work concurrently (for example, while the application is still running) to keep garbage collection pauses short. It is designed for applications with medium-sized to large-sized data sets in which response time is more important than overall throughput because the techniques used to minimize pauses can reduce application performance.

HotSpot JVM allows you to configure separate GC algorithms for young and old generations. But you can only pair up compatible algorithms. For example, you cannot pair up Parallel Scavenge for young generation collector with Concurrent Mark Sweep for old generation collector because they are not compatible. To make it easier for you, I was going to make an infographic to show which garbage collectors are compatible, however, luckily I searched first and found one created by JVM engineer, Jon Masamitsu. 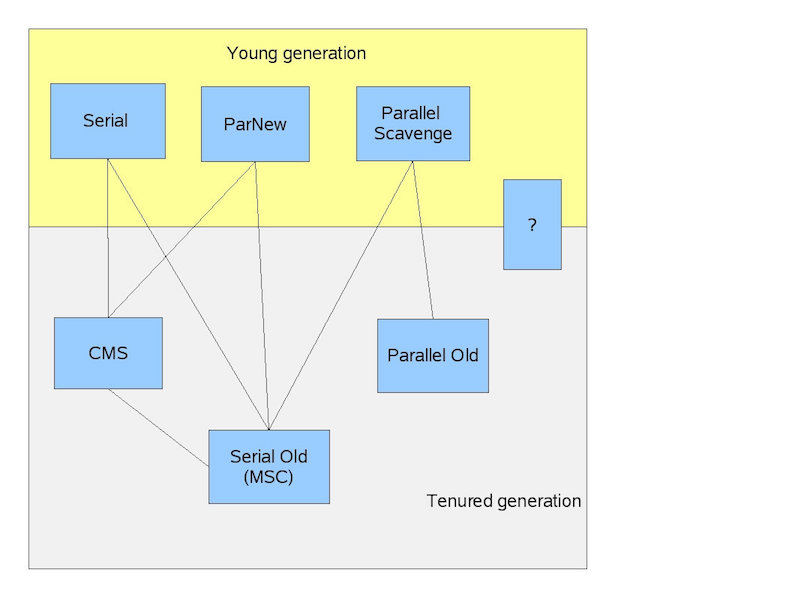 Concurrent Mark Sweep (CMS), paired with ParNew, works really well for server-side applications processing live requests from clients. I have been using it with ~ 10GB of heap memory and it keeps response times steady and GC pauses are short. Some developers I know use Parallel collectors (Parallel Scavenge + Parallel Old) and are happy with results.

One important thing to know about the CMS is that there have been calls to deprecate it and it will probably happen in Java 9 :’( Oracle recommends that the new concurrent collector, the Garbage-First or the G1, introduced first with Java, be used instead:

G1 works on both old and young generation. It is optimized for larger heap sizes (>10 GB). I’ve not experienced G1 collector first-hand and developers in my team are still using CMS, so I can’t yet compare the two. A quick online search reveals benchmarks showing CMS outperforming G1. I’d tread carefully, but G1 should be fine. It can be enabled with:

Hope you found this post useful. Until next time.

Hello,
what if major GC is not running? Should we see a gradual increase in ‘Old Gen used’ memory? I have a situation where one application is creating performance issue. Initial analysis suggested 2 things. First, minor GC takes around 10 seconds per minute( 0.4-0.5 seconds per one minor GC). Second, major GC is not running. Because of this behavior, used memory is piling up and eventually ends up in restarting the server. But I could find a strange behavior. Though I expected a continuous increase in the used memory, I could see a small decrease in the used memory in a random manner. Could you please explain this behavior? Will objects move from Old Gen to Young Gen in any case?

thanks. very detailed and enriching.

I think you have a typo:

The image I used to show “HotSpot Heap Structure” needs clarification: The ‘Permanent Generation’ was replaced by ‘Metaspace’ in Java 8. Although I didn’t discuss Permanent Generation in the post, the main difference between it and the Metaspace is that Metaspace can dynamically resize (grow and shrink). Here’s more information: https://stackoverflow.com/q…

I think it did.

1- on the first example with GC logs you say objects were moved to second survivor space. Where do you get that information from? Or the GC just moves between the 2 survivor spaces every time?

2- on the second example, why do eden objects get moved into the old generation immediately? Why do they don’t get through survivor space?

Such a brilliant article.

I wish detecting memory leaks was simple. In my latest project, it took us (2 people) a couple of days to identity a very slow leak.

Profiling helps. I use YourKit, but any profiler should do. Reduce the max memory size and put your application under load. Observe memory profile. If the old generation space continues to build up slowly and doesn’t go down, you may have a memory leak. Enable ‘object allocation recording’ and you may see which objects are being excessively created. Enabling verbose GC during troubleshooting also helps. https://www.yourkit.com/jav…

These are just heuristics of course. Understanding the java memory model helps when you are investigating. You can also use static code analyzers that may identify things like String.intern(), unclosed streams or connections, and large static objects.

Such a brilliant article.

Best article on garbage collector I have read so far.

Every time a minor GC happens:
- objects move from Eden and one of the survivor spaces to the empty survivor space first example (createFewLongLivedAndManyShortLivedObjects)
- objects that have survived many minor GC’s are moved to the old generation
- if there isn’t enough room in the young generation, objects can be prematurely pushed to old generation (second example)

Really liked the insight provided on this topic.

Good information. One of the key features of G1 Garbage collector is its ability to limit the GC pause time (i.e. you can set the desired maximum pause time) without compromising on throughput.Garbage collection