Up to this point we have been considering algorithms deterministically, i.e. best and worst case behavior. We have occasionally looked at average case behavior, but assumed that all inputs are equally likely to occur. Sometimes the exact inputs for an algorithm are unknown, but an input distribution can be approximated to provide the probability that certain inputs will occur. Using input probability distributions to analyze algorithms is known as amortized analysis and is beyond the scope of this course. However we will investigate a useful technique for probabilistic analysis known as indicator random variables in the context of two common counting problems.

Consider that you are in charge of hiring and are looking to fill an office position. The prospective candidates are sent by an employment agency and are assumed to be numbered 1..n. Your hiring strategy is to interview each candidate and hire them if they are better qualified than the current employee (a rather cut throat approach).

The question the CFO of the company wants answered is - What is the expected cost of this hiring strategy?

The worst case is if the candidates arrive in increasing order of skill in which case all of them would be hired (and each previous one fired) giving a hiring cost of O(c2n).

The best case is if the first candidate is the best one in which case they are the only one that is hired for a total hiring cost of O(c2).

A first intuitive guess for the average case would be O(c2(n/2)), i.e. half of the candidates are hired. However the actual average case will depend on the distribution of the n! possible permutations. In order to mitigate the possibility of the employment agency maliciously sending the candidates in order of increasing skill (so that they get the most money), we will take control by randomizing the inputs before processing (which could be done by providing them the random order to send candidates). Thus the worst case occurs only if we are unlucky and unfortunately select (by random chance) the poor permutation.

Each input sequence will have an individual hiring cost, but since the sequence itself is a random variable the average hiring cost will be the expected value of the hiring costs. Recall from discrete math or probability and statistics that the expected value of a random variable X that can take on n different values {x1,x2,…,xn} that occur with probabilities {p1,p2,…,pn} (note that p1 + p2 + … + pn = 1) is given by the formula

Thus if we assume that each of the n! permutations is equally likely to occur (with probability 1/n!), we could compute the expected value using the formula by simply computing the hiring cost for each permutation. Unfortunately this is not feasible for even small values of n. Thus we will employ another technique to find the expected value known as indicator random variables.

The technique of indicator random variables is based upon the concept of an event either occuring or not occuring. Thus for an event A (which is a random event), we will define an indicator variable as

We can then easily find the expected value of XA as

Thus the expected value of an indicator random variable is simply the probability that the event occurs.

The expected value of this random variable is 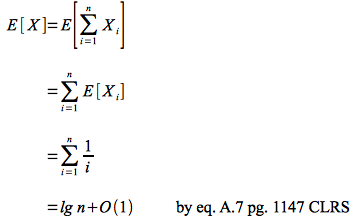 Thus on average only lg n candidates (quite a bit fewer than n/2) will be hired giving an expected hiring cost of O(c2 lg n).

Another interesting problem that can be solved with indicator random variables is the well known birthday paradox problem. The problem is - “How many people do you need in a room to have at least 2 with the same birthday?” (We assume that birthdays are distributed equally among all days of the year and neglect leap years.)

If there are k people in the room, we will define an indicator random variable Xij for the event that person i and person j have the same birthday as

Then the total pairs that have common birthdays X is simply

We compute the expected value of X similarly to before 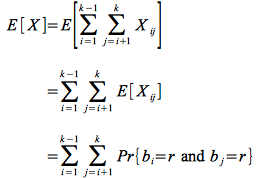 Now we note that the probability that i and j have the same birthday is 1/n where n is the number of days in the year. This is easily seen because person i will have birthday on a fixed day r, so the problem reduces to determining the probability of selecting a particular value (r) from n possible numbers at random. This probability is clearly 1/n.

Thus the expected value reduces to