In order to formulate a good “guess” at a solution to use in the substitution method, a recursion tree can often be constructed to find an approximation to the run time. Similar to the one constructed for merge sort, the procedure consists of: 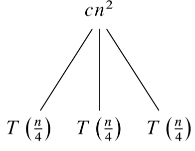 Expanding the next level gives 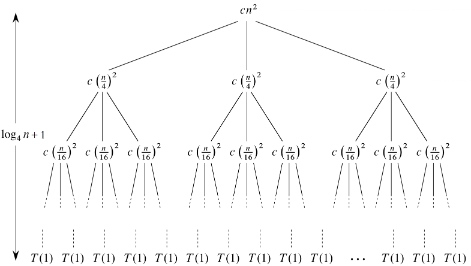 It can be seen from the diagram that each level has 3i terms of c (n/4i)2. Hence the run time for each level is

Thus summing up the run time for all the levels gives 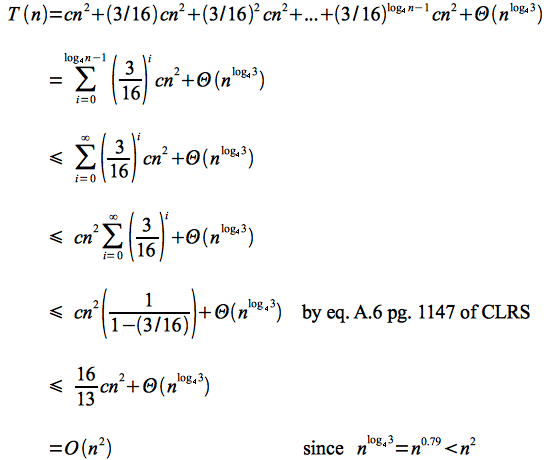 Note: This strictly gives an upper bound which can be used as a starting “guess” for the substitution method.

While the recursion tree method provides an approximate bound, to mathematically prove that the bound is correct requires the substitution method. This method essentially uses a proof technique similar to induction where the bound is verified for the recursive equation and a base case is found that holds for the recursion. To accomplish the proof, the bound is assumed to hold for T(n) and then is substituted into the recursive equation to demonstrate that the assumption is correct by deriving EXACTLY the same bound as the assumption. The technique is best demonstrated by example.

Example (to verify the recursive tree “guess” for the previous example)

Show that the solution for

Assume the solution holds so that by the definition of O()

for some c > 0. Substituting the assumption into the T(n/4) term gives 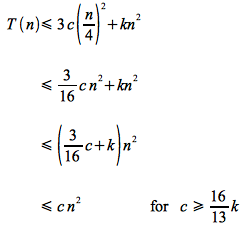 Evaluating the assumption for the solution gives

Note: Unlike inductive proofs where the induction must hold for all n, recursive proofs for asymptotic bounds only need to hold for n ≥ n0. Hence we only need to find a value of n (not necessarily n = 1) for which the base case is satisfied.

Often our guess is “too weak” to show the induction, however we can sometimes include a lower order term (which does not change the asymptotic bound) in order to prove the solution.

Show that the solution for

Assume the solution holds so that by the definition of O()

for some c > 0. Substituting the assumption into the T(n/2) term gives

However we needed to show T(n) ≤ cn NOT cn + 1 (even though 1 seems negligible for large n)! Instead we try another “guess” which still satisfies the asymptotic bound 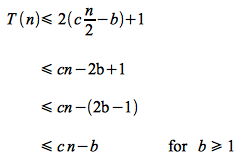 After verifying boundary conditions, we have proven that T(n) = O(n).

Lastly we can sometimes perform a substitution of variables to transform a recursive equation into a form that we can more easily solve.

Find the solution to the following recursive equation

Let m = lg n ⇒ n = 2m. Then the recursive equation can be rewritten as