Last lecture provided the framework for maximum flow problems and proved the key theorem - max-flow min-cut - that all algorithms are based on. This lecture we will investigate an algorithm for computing maximal flows known as Ford-Fulkerson.

This algorithm runs efficiently as long as the value of the maximal flow |f *| is reasonably small or if poor augmenting paths are avoided.

An extension that improves upon the basic Ford-Fulkerson method is the Edmonds-Karp algorithm. This algorithm finds the augmenting path using BFS with all edges in the residual network being given a weight of 1. Thus BFS finds a shortest path (in terms of number of edges) to use as the augmenting path. With this modification, it can be shown that Edmonds-Karp runs in O(VE2). 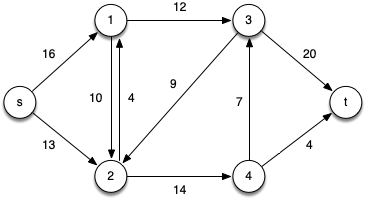 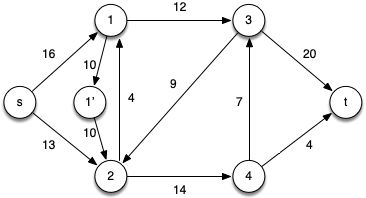 Note that clearly |f *| ≤ 24 (the smaller of the capacities leaving the source or entering the sink). 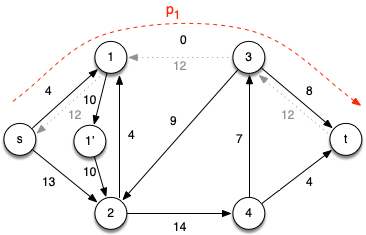 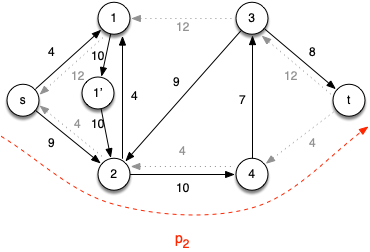 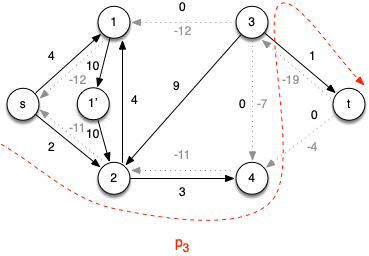 At this point there are no other augmenting paths (since vertex 3 is the only vertex with additional capacity to the sink but has no flow in from other vertices). Hence the final flow network with a min-cut shown is 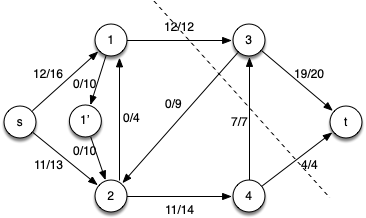 Note As we admit flow along an edge (u,v), we create negative flow along the reverse edge (v,u), i.e. the flow provides capacity for that edge. 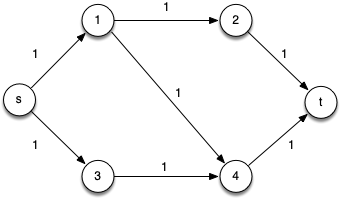 Iteration 1: However, consider the following alternative initial augmenting path p1 = < s, 1, 4, t > (which is valid since it also contains only 3 edges) which has cf(p1) = 1 giving the residual network 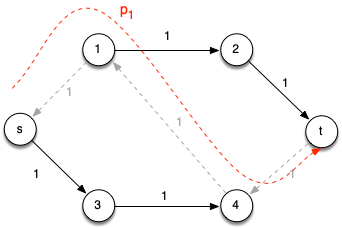 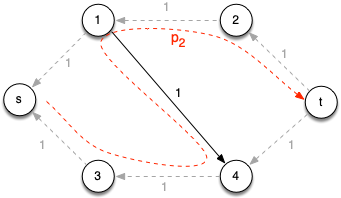 Note this second augmenting path essentially restores the capacity in the original edge (1, 4).