One of the most commonly used sorting algorithms is quicksort. While the worst case run time of quicksort is O(n2), the average run time is O(n lg n) but typically with a smaller constant than merge or heap sorts. Like heapsort, quicksort also operates in place.

Quicksort is a divide-and-conquer sorting routine (similar to merge sort) where a pivot element is selected to partition the array into two (possibly unequal or even empty) subarrays positioning the pivot element in the proper sorted location. The algorithm then recurses on both subarrays performing the same procedure. Since each step places the pivot element into its final location, there is no combine step needed. Thus the pseudocode for the quicksort algorithm is

Note that while the pivot element is in the correct final location, the two other pieces are not sorted.

The pseudocode for the partitioning routine is

Since the loop runs from p to r-1 (which for the initial call is 1 and n-1) and all other statements have constant run time, the total run time for PARTITION() is O(n).

Unlike merge sort where the array was split in half at each step, the partition sizes for quicksort depend on the relationship of the elements to the pivot. Thus we will perform an analysis on the worst, best, and average cases.

The worst case (unlike insertion sort) occurs when the array is already sorted. In this case the pivot element is always the largest element at each step and thus the array is partitioned into subarrays of size n-1 and 0. This gives the following recursive equation 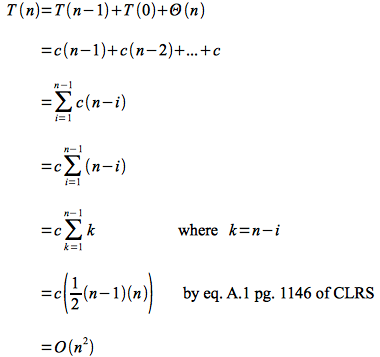 Thus quicksort has worst case run time O(n2) which is for a sorted array (where insertion sort has run time O(n)). One way to avoid this issue is to simply preprocess the array to verify it is not sorted which takes O(n) time (thus will not affect the asymptotic run time of quicksort).

The best case occurs when all the partitions are balanced, i.e. are equal of size n/2. This gives the recursive equation

This equation can be solved with the master theorem (or recall this is the same recursive equation as merge sort) to give a best case run time of O(n lg n). Thus it appears that even in the best case, quicksort is asymptotically no better than either mergesort or heapsort.

In the average case the partitions will not be perfectly balanced, but will still produce a recursion tree that has no more than cn cost for lg n (actually logb n where b is the same constant as in the master theorem) levels giving an average run time also of O(n lg n). The more unbalanced the partitions, the larger the hidden constant (and higher the actual run time). However as long as there are some reasonably balanced splits, the cost of the bad splits is partially offset by the good splits to give an often empirically faster algorithm than merge or heap sort. Alternatively, we can try to produce a “good mix” of partitioning by randomizing the input sequence prior to sorting (also reducing the chance of the worst case) or by selecting a random pivot element (and swapping it with the last element in the subarray).