The last several lectures presented numerous NP-complete problems. While there is no efficient way of finding the optimal solution to several of them, e.g. traveling salesman, there are ways to efficiently find approximate solutions. It is interesting that while we may not know the optimal value, we can know how far (worst case) our approximate solution is from the optimal. In this final lecture we will look at a few approximation algorithms for vertex cover and traveling salesman that are based on polynomial time graph algorithms from this course.

The first problem we will find an approximate solution to is vertex cover. As a review, the vertex cover problem is to find the minimum subset of vertices that touch every edge in a graph.

The following algorithm can find an approximate vertex cover that contains no more than twice the minimum number of vertices, i.e. is a 2-approximation algorithm.

The algorithm simply selects an edge (adding the endpoints to the vertex cover) and removes any other edges incident on its endpoints (since these are covered by the endpoints). It repeats this process until there are no more edges to remove. Clearly this algorithm runs in polynomial time (O(E)).

Clearly when the algorithm terminates, the set C will be a vertex cover (since all edges will be touched by a vertex). Assume the random edges the algorithm selects is the set A. To cover these edges, any vertex cover (including the optimal one C*) needs to contain at least one endpoint for each edge. However in A, no two edges share an endpoint since once an edge is selected, all other edges incident to its endpoints are removed. Therefore, no two edges in A are covered by the same vertex from C* giving

Because the algorithm selects edges with endpoints not currently in the set C, clearly (since every edge will have 2 distinct vertices)

Hence the algorithm returns a vertex cover with no more than twice the number of vertices in an optimal vertex cover. 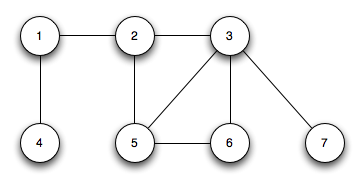 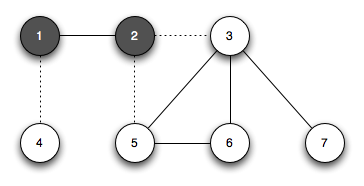 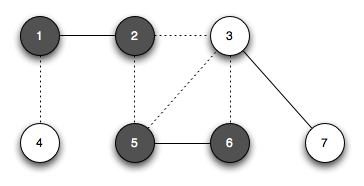 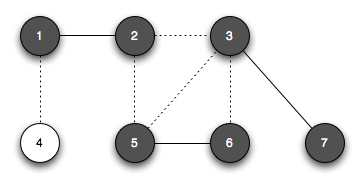 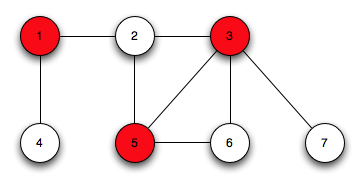 basically that it is faster to go directly between two points than through an intermediate vertex. It can be shown that even by imposing this constraint on the graph that this version of traveling salesman is still NP-complete (and also that without this constraint that there is no good approximation algorithm unless P = NP).

The following algorithm, which utilizes Prim’s algorithm for finding MST, can find a tour of weight no more than twice the optimal.

A preorder tree walk simply recursively visits vertices in the tree based on when they were discovered. This approximation algorithm runs in O(V2).

Consider a full walk W that visits each vertex both upon the initial recursion and whenever the tour revisits the vertex as recursive branches are completed. Therefore each edge of T will be traversed exactly twice for W giving

Combining the above two equations gives

However since the walk W visits some vertices more than once, it is not a tour. But since the graph satisfies the triangle inequality, removing any vertex from the walk will not increase the cost of the walk (since it will be lower cost to go direct). By repeatedly removing all but the first visit to each vertex, we obtain the preordered walk (that contains all the vertices once except for the root) giving a hamiltonian tour H. Since we only removed vertices from W (not increasing the cost at any step by the triangle inequality)

Finally combining this inequality with the previous one gives

Thus the tour found by the algorithm will have cost at worst twice the optimal value. 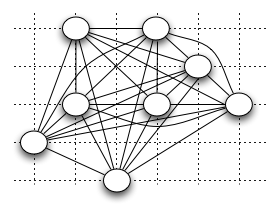 Running Prim’s algorithm on this graph (starting with vertex 1) gives the following MST with the vertices labeled in order of removal from the priority queue (i.e. the order in which they were added to the MST). 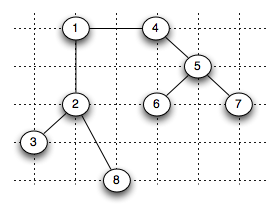 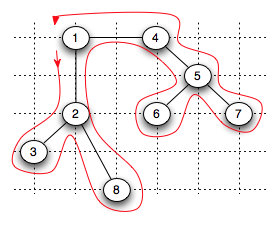 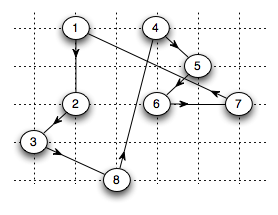 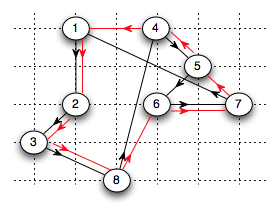 Another strategy that can also be shown to be a 2-approximation algorithm is a greedy approach where we simply start at any vertex and proceed by choosing the next closest vertex to any of those currently in the partial tour (from the ones that have not yet been visited) and inserting it into the tour.