Another graph problem that can be shown to be NP-complete is vertex cover. A vertex cover is a subset of vertices that touch all the edges in an undirected graph. 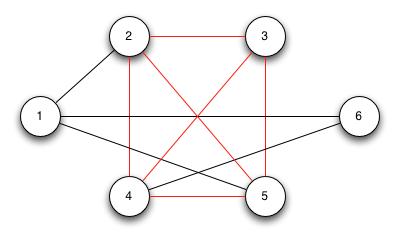 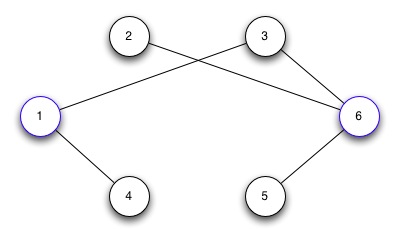 Given a graph G, find a simple cycle that touches every vertex exactly once.

One of the most famous (and most studied) NP-complete problem is known as the traveling salesman. The name is derived from the problem that a salesman must visit each of n cities (i.e. make a hamiltonian tour) exactly once using the shortest path possible. It is obvious that this is a closely related problem to hamiltonian tour except with weighted edges (representing the cost or distance between cities).

Given a complete undirected graph G with non-negative integer weight edges w(u, v), find a tour that visits each vertex exactly once with minimum weight. Again we convert the optimization problem to the decision problem that a tour exists with weight at most k.

To prove that traveling salesman is NP-complete, we will reduce any instance of hamiltonian cycle to traveling salesman. Let G be a graph and construct the complete graph G’ by adding any edges not in G. Weight the edges as follows:

Graph G will have a hamiltonian cycle if and only if G’ has a tour with 0 cost.

Suppose G has a hamiltonian tour h. Each edge of h belongs to G and thus has edge weight 0 in G’ ⇒ the tour h in G’ has total weight 0.

Consider the following graph (identical to the one used in the example for vertex cover) with the hamiltonian cycle {1, 2, 5, 3, 4, 6, 1}indicated in red 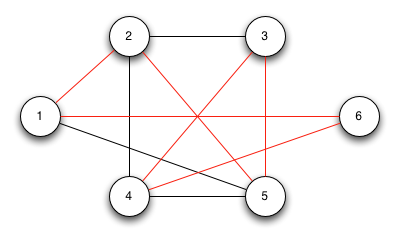 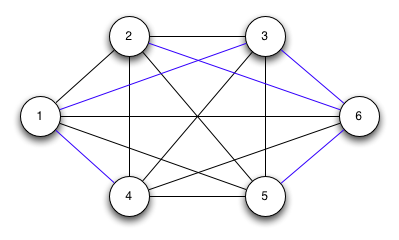 However, often real world problems take the form of an NP-complete problem with sufficiently large n to make brute force infeasible. Never the less, a feasible solution is needed, even if it is suboptimal, and thus there has been much work in finding polynomial time approximation algorithms to find good solutions to otherwise NP-complete problems.