Bellman-Ford and Dijkstra’s algorithms provide a means to find the shortest path from a given source. However often we may wish to find the shortest paths between all pairs of vertices. One way to accomplish this would be to simply run Bellman-Ford or Dijkstra’s algorithm for each vertex in the graph. Thus the run times for these strategies would be (particularly for dense graphs where |E| ≈ |V|2):

In the case of dense graphs an often more efficient algorithm (with very low hidden constants) for finding all pairs shortest paths is the Floyd-Warshall algorithm.

k is not an intermediate vertex of p (i.e. is not used in the minimum weight path)

k is an intermediate vertex of p (i.e. is used in the minimum weight path)

Thus if we define a quantity d(k)ij as the minimum weight of the path from vertex i to vertex j with intermediate vertices drawn from the set {1, 2, …, k} the above properties give the following recursive solution

Basically the algorithm works by repeatedly exploring paths between every pair using each vertex as an intermediate vertex. 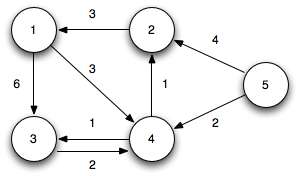 Iteration 3: (k = 3) No shorter paths are found through vertex 3

Iteration 5: (k = 5) No shorter paths are found through vertex 5

The final shortest paths for all pairs is given by 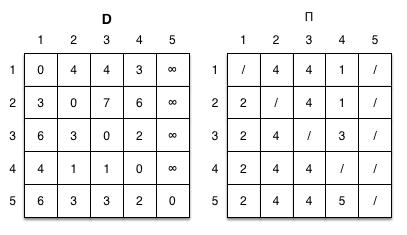 This procedure can implement a slightly more efficient algorithm through the use of logical operators rather than min() and +.