A Boolean expression is a formula composed of

Parentheses delineate clauses that consist of a group of variables that are connected by operands. For example

While it would seem intuitive to simply write the Boolean expression for the circuit, this cannot necessarily be done in polynomial time if the gates have fan-out greater than two (i.e. the output of one gate goes to the input of more than 2 other gates). Instead what we do is represent each wire in the circuit by a Boolean variable xi. We then represent each gate by a clause giving the relationship of inputs to output. For example the clause for the following gate

We then construct the Boolean formula by simply AND‘ing all the clauses with the output (which can be done in polynomial time). Clearly both the circuit satisfiability and Boolean satisfiability counterparts have the same resulting decision outputs. For example, the circuit given by 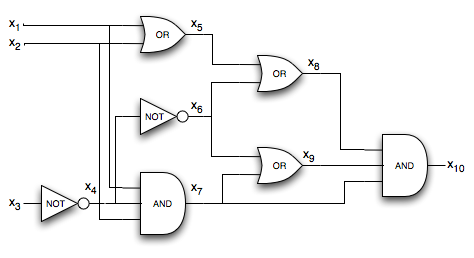 would have the corresponding formula

If the Boolean expression consists of exactly 3 OR‘ed variables per clause with all the clauses being AND‘ed, then the expression is said to be in 3-CNF form (conjunctive normal form).

Given a 3-CNF expression, find an assignment of the literals that satisfies the expression, i.e. causes the expression to evaluate to 1. It can be shown that 3-CNF is also NP-complete by reducing general Boolean satisfiability to 3-CNF.

The reduction is performed in three steps:

Since each Boolean operator is a binary operator, we simply construct a binary parse tree where the nodes are the operators and the literals are leaves. In the case of clauses with multiple literals, we simply add associative paretheses as needed to make binary clauses. We then construct a new expression, similarly to the above reduction from circuit satisfiability to Boolean satisfiability, by AND‘ing the clauses representing each node with the final output.

Again since any assignment of p and q will make one of the clauses evaluate to the original and all the others evaluate to 1.

Parse the expression by creating the following output variables of subexpressions: 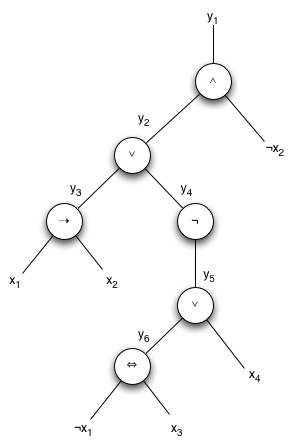 Step 2: Convert each clause to CNF

Thus we can write ¬ φ’1 by simply AND‘ing the literals (negating any false values) for each row that evaluates to 0 and OR‘ing all the 0 rows (i.e. sum-of-products) giving

The sum-of-products for ¬ φ’4 gives

Clearly all the clauses in φ”1 contain three literals, so that clause is unchanged. However for φ”4, the two clauses only contain 2 literals. Thus we add an auxilary variable p to both of them giving

In this manner we convert the original expression into one that contains AND‘ed clauses each with exactly 3 OR‘ed literals.

Given a graph G, find the clique with maximal size, i.e. the complete subgraph with the most vertices. Since this is an optimization problem, we cast it into a decision problem by asking if on a graph there is a clique of size k. It can be shown that the clique problem is NP-complete by reducing 3-CNF to an instance of clique.

The proof of the reduction from 3-CNF to clique is very interesting because it takes a Boolean expression and converts it into an equivalent graph even though the problems seem to stem from different mathematical domains. Again the proof is constructive. Assume that the 3-CNF expression has k clauses. We then construct a graph such that if the 3-CNF expression is satisfiable, then there will be a clique on the graph of size k.

Step 1: Add vertices to the graph

Add edges between vertices under the following conditions

Using this procedure, it can be shown that if there is an assignment of literals for the 3-CNF formula then those literals will produce a clique of size k. Since at least one literal (or its negation) must be assigned 1 in the expression, these vertices will form a clique in the graph. Conversely, if there is a clique of size k then the clique will contain the literals that satisfy the 3-CNF formula. Since there are no edges between vertices from the same clause, assigning the vertices in the clique to 1 will give a satisfying assignment.

(clearly a satisfiable assignment is < 0/1, 0, 1>). The graph for the above expression is (with the size 3 clique shown in red) 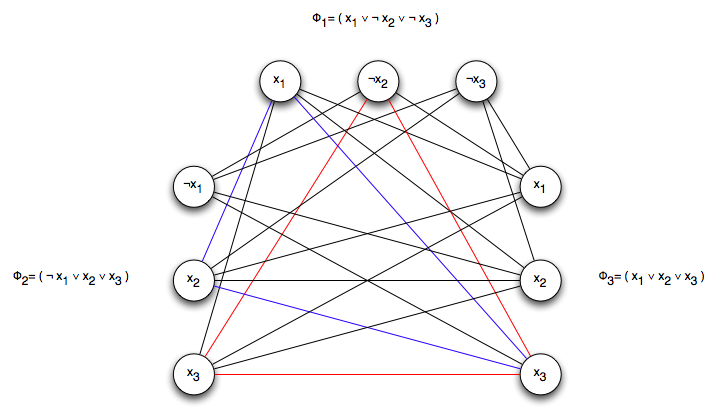 Note that another clique (indicated in blue) of size 3 would give the assignment <1, 1, 1> which also satisfies the 3-CNF expression.