The last type of graph problem we will investigate is maximum flow problems. Intuitively, these problems can be thought of as starting with a source faucet that can provide as much water as possible. The faucet is connected to a sink drain that can handle any amount of water through a network of pipes. The pipes are of different sizes, i.e. have different capacities which limit the flow through certain branches of the network. The problem is to determine what is the maximal flow, i.e. the most water, that can travel through the network from the faucet to the drain.

We shall now formalize the maximum flow problem in graph terms, state some key definitions for network flows, and prove a very important theorem that will serve as the foundation for the algorithms.

Given a flow network G(V, E) which is a connected, directed graph with each edge (u,v) having a capacity c(u,v) ≥ 0 (assuming c(u,v) = 0 if (u,v) ∉ E), a source vertex s, and a sink vertex t: a flow is a function between all pairs of vertices that satisfies

The value of a flow is defined as

Given G, s, and t find the maximal flow value.

The problem of multiple sources and/or sinks can be easily recast as a single source, single sink problem by creating “super” source and sink nodes with edges of infinite capacity between the “super” nodes and the network source/sinks as illustrated below. 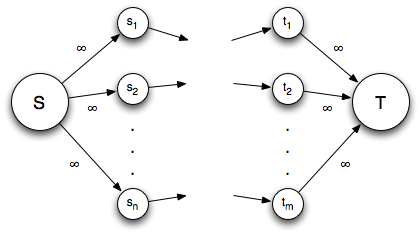 A residual network is an induced graph that contains edges that can admit more flow, i.e. the edges that are not at capacity. The residual capacity of any edge is given by

A cut is a partition of V into sets S and T such that s ∈ S and T = V - S has t ∈ T. This is similar to MST cuts except that the source must be in one partition and the sink in the other partition (and the graph is directed).

The net flow across the cut is f(S,T) and the capacity of the cut is c(S,T).

A minimum cut is a cut with minimum capacity. It can be shown that the net flow across any cut is equal to the total flow of the network (again by flow conservation), and furthermore the value of any flow is upper bounded by the capacity of any cut.

Using the above definitions, the following theorem can be proven:

If f is a flow in a network G with source s and sink t, then the following three statements are equivalent:

By the max-flow, min-cut theorem, a maximal flow can be found by continually augmenting flow along paths with residual capacity, i.e.

While this algorithm is not particularly useful for implementation, we can observe that for integer capacities the algorithm runs in O(E|f *|) since each iteration checks at most E edges (e.g. BFS) and increases the flow by at least 1.