There are three parts to a divide and conquer strategy:

One application of the divide and conquer approach to sorting is an algorithm known as merge sort. The three parts for merge sort are

The pseudocode implementation for merge sort is

First we will examine the run time of MERGE() and then analyze the recursive MERGE-SORT() routine.

Thus the run time for MERGE()

i.e. MERGE() is a linear algorithm.

MERGE-SORT() recursively divides A[] in half (using a constant time computation for q) calling MERGE-SORT() on each half until p ≥ r (i.e. until each subarray has a single element). At this point each subproblem is trivially solved in constant time. Thus for n=1 (i.e. the base case for the recursion)

Otherwise the problem is divided into two subproblems of length n/2 which are solved using MERGE-SORT() and then combined using MERGE(). Thus the recursion can be expressed as

Hence we can write the recursive equation for MERGE-SORT() as

If we let c be an upper bound on Θ(1) and the constant in Θ(n), then we can write the recursion as 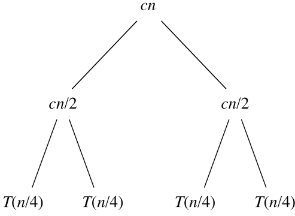 Finally we continue to expand the recursive terms until n=1 (giving n leaves at the last level). 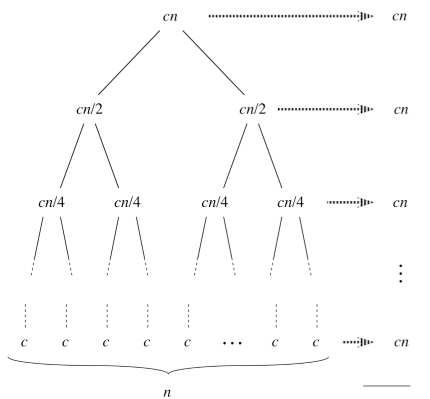 Note that at each subsequent recursive level i the recursive term becomes n/2i and the recursion will terminate when n/2h = 1 ⇒ h = lg(n) where lg represents log2. Thus there will be h+1 levels (i = 0 .. h) with each level having a run time of cn. Hence the total run time of the algorithm will be bounded by

We will see later that the bound is actually asymptotically tight and thus the run time of merge sort is Θ(n lg n).