a sequence of length k

is a subsequence if there exists a strictly increasing set of indicies <i1, i2, …, ik> such that

In other words, all the elements of Z appear in the same order as they appear in X (but not necessarily consecutively).

The brute force procedure would involve enumerating all 2m subsequences of X (again simply consider all binary strings of length m) and check if they are also subsequences of Y keeping track of the longest one. Clearly this produces exponential run time and does not take advantage of the optimal substructure of the solution.

with X0 representing the empty sequence.

Case 1 reduces to the single subproblem of finding a LCS of Xm-1, Yn-1 and adding xm = ynto the end of Z.

Cases 2 and 3 reduces to two subproblems of finding a LCS of Xm-1, Y and X, Yn-1and selecting the longer of the two (note both of these subproblems involve also solving the subproblem of Case 1).

Hence if we let c[m,n] be the length of a LCS for X and Y we can write the recursion described by the above cases as

Since each step of the recursion removes at least one element from one of the sequences, there are only Θ(mn) subproblems to consider. Hence we can solve it by creating two tables - C an m x n table storing the LCS lengths and B an m x n table for reconstructing the LCS.

Note that not all subproblems are considered depending on which recursive branch is selected.

Step 3: Compute the length of the LCS (bottom-up)

When the procedure is complete, the optimal length of the LCS will be stored in c[m,n]. Thus since we fill in the entire table, the procedure will take O(mn).

Start at any entry containing the max-length (for example c[m,n]) and follow the arrows through the table adding elements in reverse order whenever a ↖ occurs. At worst we move up or left at each step giving a run time of O(m + n).

Alternatively we could avoid the B matrix (saving some space) and reconstruct the LCS from C at each step in O(1) time (using only the surrounding table cells), however it does not provide any improvement in the asymptotic run time. 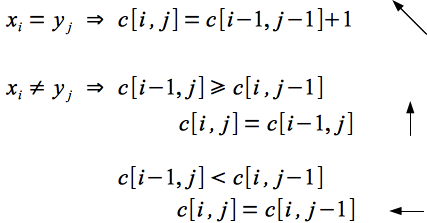 The completed table is given by