This lecture will be a brief review of terminology from graph theory that will be used for the algorithms in subsequent lectures. We assume that a graph G(V,E) is represented as a pair of finite sets where V is the set of vertices and E is the set of edges.

In a directed graph, the edges are represented by ordered pairs of vertices (u, v) and shown diagramatically as directed arrows (a vertex may be connected to itself via a self-loop). 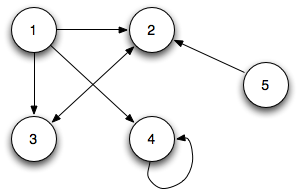 In an undirected graph, the edges are represented by unordered pairs of vertices. Thus (u, v) and (v, u) represent the same edge and are shown diagramatically as simply a connecting line (note undirected graphs may not contain self-loops). 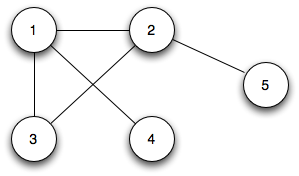 An edge (u, v) is incident on u and v, and u and v are adjacent to each other.

The degree is the number of edges incident on a vertex.

The path is simple if all the vertices are distinct.

A cycle is a path with v0 = vk (and is also simple if all the vertices except the end points are distinct). An acyclic graph is a graph with no cycles.

In a directed graph, a strongly connected component is a subset of mutually reachable vertices, i.e. there is a path between any two vertices in the set.

A complete graph an undirected graph where all vertices are adjacent to all other vertices, i.e. there are edges between every pair of vertices.

A bipartite graph is an undirected graph that can be partitioned into V1 and V2 such that for every edge (u, v) ∈ E either

i.e. the graph can be separated so that the only edges are between vertices in different subsets.

A forest is an undirected acyclic graph. If it is also connected, then it is a tree.

A directed acyclic graph is known as a DAG.

Two common methods for implementing a graph in software is either using an adjacency list or an adjacency matrix.

In an adjacency list implementation, we simply store the adjacent vertices (i.e. edges) for each vertex in a linked list denoted Adj[u]. If we sum up the lengths of all the adjacency lists, we get either

This representation is good for sparse graphs where |E| ≪ |V|2. One drawback is that to determine if an edge (u, v) ∈ E requires a list search ⇒ Θ(V).

For the original directed graph, the adjacency list would be

In an adjacency matrix implementation, we store the edges in a VxV matrix A either as binary values or real numbers for weighted edges.

This representation is good for dense graphs where |E| ≈ |V|2. The advantage is it only takes Θ(1) time to determine if an edge (u, v) ∈ E since it is simply a matrix element access. If the graph is undirected, then A = AT so only the upper triangular half needs to be stored.

For the original directed graph, the adjacency matrix would be